11 January
The Department of Civil Aviation is created within the Air Ministry to
regulate commercial aviation in the United Kingdom. Major General Sir
Frederick Sykes becomes the organisation’s first Controller-General. 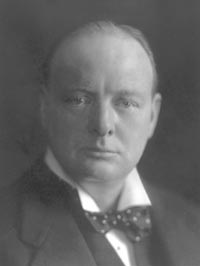 Following
the ‘Coupon’ General Election of December 1918, Winston Churchill is appointed
to the post of Secretary of State for War and the Royal Air Force (RAF)
within the new Lloyd George administration.

In combining the posts of Secretary of State for War and Secretary of
State for Air, Prime Minister Lloyd George aimed to facilitate the dissolution
of the Royal Air Force (RAF) as a separate Service.

April
A Royal Air Force (RAF) training mission leaves the United Kingdom for
Novorossisk in Russia. The mission arrives during the following month
and is subsequently reinforced by a detachment from No.47 Squadron.

April
No.5 (Operations) Group loses its command status and reverts to the control
of South-Eastern Area.

17, 20, 24 May
Following the outbreak of the Third Afghan War No.31 Squadron carries
out concentrated raids on the Afghan city of Jalalabad, during which three
aircraft are lost.

24 May
The Handley Page V/1500 four-engined heavy bomber ‘Old Carthusian’ successfully
bombs the Afghan capital, Kabul, dealing a huge blow to Afghan morale
and helping to ensure a quick settlement to the conflict.

29 May
The War Cabinet approves a proposal put forward by the Secretary of State
for War and Air, that up to 100 surplus aircraft from Royal Air Force
(RAF) stocks should be gifted to each dominion of the Empire and to India.
Small numbers of aircraft are also made available to any Colonial Government
or Protectorate requiring them.

14-15 June
Captain
John Alcock and Lieutenant Arthur Whitten Brown make the first non-stop
flight across the Atlantic Ocean. Alcock and Brown fly from St John’s
in Newfoundland to Clifden in County Galway in Eire in a modified Vickers
Vimy bomber.

After a total flying time of 16 hours 27 minutes they crash land in a
bog at Clifden Station, having mistaken soft ground for hard ground. Both
Alcock and Brown were knighted in recognition of their achievement.

25 June
The Treaty of Versailles is signed. Under the terms of the Treaty, all
German naval and military air forces are to be disbanded and all air material
either handed over to the Allies in reparation, or destroyed. In practice,
the German military authorities endeavoured to circumvent the provisions
of the Treaty from the outset.

July
The aircraft carrier HMS Vindictive is despatched to the Baltic to support
attacks on the major Bolshevik naval base at Kronstadt.

2-6 July
A Royal Air Force (RAF) airship makes the first airship crossing of the
Atlantic. Major G.H. Scott and a crew of 30 RAF and United States Navy
personnel fly the airship R34 from East Fortune in Scotland to New York.

9-13 July
Following their pioneering transatlantic flight, the crew of the airship
R34 achieve the first successful double crossing of the Atlantic when
they complete the return journey.

A
bombing campaign mounted by the Royal Air Force brings the Third Afghan
War to an end. During the course of the campaign, warning leaflets had
been dropped on Afghan towns and village settlements in an effort to keep
civilian casualties to a minimum.

15 August
The ‘Ten Year Rule’ is formulated by the War Cabinet in response to a
request for guidance from the Admiralty. This read:

“It should be assumed for framing revised estimates, that the British
Empire will not be engaged in any great war during the next ten years,
and that no Expeditionary Force is required for this purpose.”

The Ten Year Rule came to dominate decision-making with regard to defence
expenditure during the 1920s, being made a permanent rolling assumption
by Winston Churchill during his tenure as Chancellor of the Exchequer.

15 September
The Royal Air Force Coastal Area is formed from South-West Area’s No.10
Group, to control all units working with the Royal Navy in home waters.
The Air Officer Commanding Coastal Area was jointly responsible to the
Air Ministry and the Admiralty.

15 September
No.29 (Operations) Group loses its status as an independent command when
it is placed within Coastal Area.

October
The School of Technical Training (Boys) is formed at RAF Halton, establishing
a tradition of apprentice training that continues until 1993.

8 October
No.86 (Communications) Wing completes its last cross-Channel flight prior
to disbanding. Between December 1918 and October 1919 the flight had flown
a total distance of 350,000 miles.

11 December
The Secretary of State for War and Air, Winston Churchill, introduces
a White Paper into the House of Commons outlining plans for the post-war
development of the Royal Air Force (RAF). Drafted by the Chief of the
Air Staff, Air Marshal Sir Hugh Trenchard, and often referred to as the
Trenchard Memorandum, this White Paper provided for:

The White Paper also provides for the foundation of a comprehensive personnel
training structure to include the Royal Air Force College, Staff College
and Apprentice School, Halton, and the introduction of Short Service Commissions.