February-May
Following the effective termination of British administration in Sulaimaniya,
Sheikh Mahmud, the most influential tribal leader in southern Kurdistan
and Governor of Sulaimaniya under the earlier Turkish administration,
is reinstated as the Governor of Southern Kurdistan. Although Mahmud had
been removed from his post and for a time held prisoner having openly
lead an armed insurrection in May 1919, it is believed that he offered
the only opportunity for the administration to regain control over the
area.

However, Sheikh Mahmud’s marked anti-British stance, together with information
that he is formulating plans for a general insurrection in Iraq, leads
to his recall to Baghdad in February 1923. Mahmud ignores this summons
and an ultimatum is dropped to him. The Royal air Force (RAF) also drops
delayed-action bombs outside Sulaimaniya as a demonstration of intent.
Although Mahmud then sends a delegation to parlay, his protestations are
judged insincere and his quarters attacked. He then fleas Sulaimaniya,
but continues to frustrate British attempts to establish a new administration.
In an effort to restore Government control, a column occupies Sulaimaniya
on 17 May. Mahmud fleas to Persia and the column then withdraws.

18 February
The
Canadian Air Force is granted the prefix ‘Royal’. 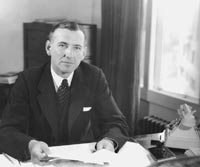 A Committee is established, under the chairmanship of the Marquess of
Salisbury, to examine the manner in which Royal Air Force (RAF) operations
should be integrated with those of the Army and the Royal Navy. A Sub-Committee
under the chairmanship of Lord Balfour is also established to consider
the optimum strength of the Royal Air Force, to safeguard British security
at home and overseas.

14 March
The Secretary of State for Air, Sir Samual Hoare, says of the Royal Air
Force, “We must keep it a corps d’elite, highly trained, well equipped
and capable, so far as possible, of quick expansion”.

March-April
Following the interception of a Turkish despatch disclosing plans for
a Turkish attack into Kurdistan, linked to a rising of local tribes associated
with Sheikh Mahmud, two columns of Imperial troops and levies supported
by Royal Air Force units occupy Rowanduz and drive Turkish troops into
Persia.

April
The first air trooping takes place during the Kurdish uprising when 280
Sikh troops are flown, by the Royal Air Force, from Kingarban to Kirkuk
in Iraq in 12-seat Vickers Vernon transports. Each soldier carries his
rifle and 15 pounds of equipment. In addition each aircraft carries 30,000
rounds of ammunition.

1 April
Existing Royal Air Force squadrons with a naval role are disbanded and
replaced by flights and each flight, normally comprising six aircraft,
is given a number in the 400 series.

May
The Secretary of State for Air is given a seat in the Cabinet for first
time. 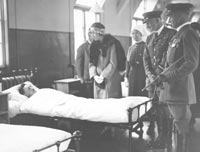 20 June
Following the release of the Interim Report of the Salisbury Committee,
set up in March, Prime Minister Stanley Baldwin announces in the House
of Commons that:

“British Air Power must include a Home Defence Air Force of sufficient
strength adequately to protect us against air attack by the strongest
air force within striking distance of this country…. In the first instance
the Home Defence Force should consist of 52 squadrons to be created with
as little delay as possible”.

Of the projected 52 squadrons, 35 are to be equipped with bombers and
17 with fighters.

25 December
During the summer of 1923, Sheikh Mahmud, who had fled to Persia following
the arrival of a British column in May, returns to Sulaimaniya and proclaims
himself King of Kurdistan. Although he is informed that he will remain
unmolested as long as he limits his activities to a defined area, Sheikh
Mahmud is not restrained by this concession. In response, the Royal Air
Force (RAF) bombs his house in Sulaimaniya and subsequently, he once again
‘retires’.

December 1923 – January 1924
The Royal Air Force (RAF) carries out two major air actions against Akhwan
raiding forces from the Najd territory which are menacing the tribes of
southern Iraq. Further air action later in the year results in the conclusion
of a treaty between the Nadj and Iraq Governments, aimed at ending the
Akhwan raids.