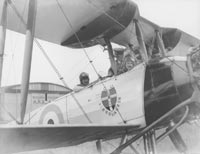 March
Bristol Fighters and de Havilland DH9s from Nos. 5, 27 and 60 Squadrons
Royal Air Force (RAF) are despatched to the airstrips at Miranshah and
Tank, under the command of Wing Commander R.C.M. Pink, in an effort to
control the Mahsud tribesmen of South Wazirstan. Air action begins against
Mahsud mountain strongholds and an ‘air blockade’ is established. The
air operations are dubbed ‘Pinks’ War’ in honour of the senior Royal Air
Force commander.

1 May
The Mahsud tribesmen of South Wazirstan seek peace, ending ‘Pinks’ War’.
Order had been restored at the cost of one aircraft and its crew and no
ground troops were used. 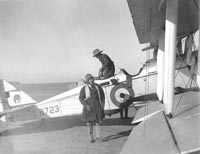 22 May
A flight of Sopwith Snipes of No.1 Squadron supporting force of levy cavalry
en route to Halebja annihilate a large body of Mahmud’s followers who
are caught in the open.

22 October
No.1 Apprentices Wing is formed at Halton.

Three de Havilland DH9As of No.47 Squadron, led by Squadron Leader A. Coningham,
begin the first trans-African flight. The
detachment flies from Cairo to Kano in Nigeria, arriving back at Cairo
on 19 November.

The Observer Corps is formed.