A
tri-service ‘Shanghai Defence Force’ is hurriedly despatched from the
United Kingdom to protect European nationals and their property in Shanghai
from Chinese communist forces.

The air component of the force includes Fleet Air Arm Flights aboard
the carriers HMS Hermes (already on the China Station) and Argus. Subsequently,
Royal Air Force China Command at Hong Kong is created to administer Royal
Air Force units in the theatre, with Group Captain E.D.M. Robertson as
commander.

1 January
The Imperial Defence College (IDC) is opened. The commandant of the College
is selected from each fighting Services in turn, with Air Marshal Sir
Robert Brooke-Popham the first from the Royal Air Force (19 January 1931). 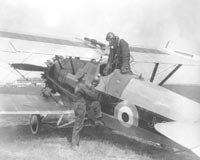 The
Chief of the Air Staff, Air Chief Marshal Sir Hugh Trenchard, is promoted
to Marshal of the Royal Air Force.

14 April
Six Fairey IIIDs of No.441 Flight, commanded by Captain G.E. Wildman-Lushington
of the Royal Marines, are stationed at the only available landing ground
within Shanghai, the recreation ground.

After a flight of some 34 hours 45 minutes Carr and Gillman ditch in
the Persian Gulf, having flown a distance of 3,400 miles. However, their
attempt is overshadowed by Charles Lindburgh’s successful solo non-stop
crossing of the Atlantic. Lindburgh lands at Le Bourget on 21 May, having
flown a distance of 3,590 miles.

August
Following the easing of tension at Shanghai, Royal Air Force China Command
is disbanded and No.2 Squadron departs for the United Kingdom, arriving
during October.

26 September
A Supermarine S5 seaplane flown by Flight Lieutenant S.N. Webster of the
Royal Air Force wins the Schneider Trophy competition, with an average
speed of 281mph, at a race held at Venice. This aircraft also sets a 100
kilometre closed circuit record of 283mph.

November- May 1928
Following the failure of an agreement between the Iraq and Najd Governments,
‘Akforce’, Royal Air Force armoured car sections, supported by No.55 and
No.84 Squadrons, begin action against Akhwan tribesmen in Southern Iraq
and Kuwait. As a result, Ibn Sa’ud gives a written undertaking that he
will restrain his tribes from further raiding.