The Observer Corps is transferred from War Office to Royal Air Force control,
under the command of Air Commodore E.A.D. Masterman.

The Observer Corps consists of volunteers, enrolled as special constables,
who are recruited to observe, identify and report hostile aircraft within 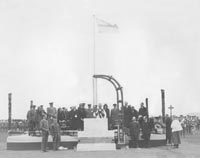 visual range. Following experience gained in the First World War, Observer
Corps personnel are to man posts sited at 5-mile intervals around the
United Kingdom. They are tasked with observing and reporting by telephone
the course and height of all aircraft seen or heard to group centres,
which in turn report to Royal Air Force Fighting Area Headquarters and
adjacent sector operations rooms.

In response to raids by the Suhebi into the fertile Lahej region of Aden,
No.8 Squadron commence a punitive bombing campaign that aims to destroy
Suhebi crops and dwellings. The bombing is halted in March when the Suhebis
agreed to pay reparations.

Squadron Leader A.G. Jones-Williams and Flight Lieutenant N.H. Jenkins
fly in a Fairey Long Range Monoplane, non-stop between RAF Cranwell and
Karachi in India, a distance of 4,130 miles, in a time of 50 hours 48
minutes.

The Schneider Trophy competition is won for the second time by the Royal
Air Force (RAF). A Supermarine S6 of the Royal Air Force High Speed Flight,
piloted by Flight Lieutenant H.R.D. Waghorn take the trophy with an average
speed of 328mph.