No.30 Squadron locates and attacks rebel Kurdish horsemen near Muan.

Sheikh Mahmud, the rebel leader of the Kurds in Iraq surrenders following
air action against his tribesmen. 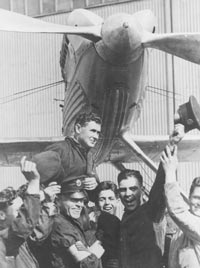 The Schneider Trophy is won outright, for the Royal Air Force, by Flight
Lieutenant J.N. Boothman flying a Supermarine S6B seaplane at an average
speed of 340mph.

This third victory enables the Royal Air Force to permanently retain
the Schneider Trophy. The trophy, and the S6B in which it was won for
the final time, are now in the collection of the Science Museum.

Flight Lieutenant G.H. Stainforth sets a new world speed record, breaking
the 400mph barrier. The flight, in a Supermarine S6B, reaches 654kph (406mph)
and takes place at Ryde on the Isle of Wight.

A non-stop flight from Cranwell in Lincolnshire to Abu Sueir in Egypt,
in a Fairey Long Range Monoplane is crewed by Squadron Leader O.R. Gayford
and Flight Lieutenant D.L.G. Bett over a distance of 4,600 kilometres
(2,857 miles).

An aerial survey of British Somaliland begins. The survey will cover 3,000
square miles and be completed in March 1933.