Following proposals advanced by Mr R.A. Watson Watt, the Superintendent
of the National Physical Laboratory’s Radio Department, to the Committee
for Scientific Survey of Air Defence (CSSAD), the first practical demonstration
of the use of radio to detect aircraft is carried out. Signals generated
by a 10 kilowatt transmitter at Daventry are reflected off a Handley Page
Heyford of the Royal Air Force, enabling the aircraft to be detected by
staff from the Slough Radio Research Station using experimental apparatus
erected at Weedon in Northamptonshire. An estimated maximum detection
range of approximately 8 miles is achieved during the trial.

The German Air Force (the Reichsluftwaffe) is officially formed and the
existence of the new service, which contravenes the terms of the Treaty
of Versailles, is made public by Hermann Goering in an interview with
a British journalist on 10 March. 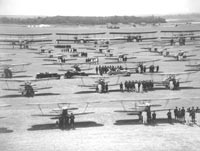 Proposals to increase the strength of the Royal Air Force by 1,500 aircraft
by 1937 are announced.

A major earthquake in India destroys the Royal Air Force base at Quetta
and the nearby settlement of the same name. All of the station’s buildings,
apart from the hangers collapse, killing 55 Royal Air Force personnel
and dependants and 66 local employees. Of the two squadrons based at Quetta,
only three of No.31 Squadron’s aircraft remain serviceable and all of
No.5 Squadron’s aircraft are damaged. Over 30,000 of the 65,000 population
of Quetta lose their lives.

6 July
A
Royal Jubilee Review of the RoyalAir
Force by King George V is held at Mildenhall and Duxford and includes
an inspection of 200 aircraft on the ground and a flypast of 350 aircraft.

The first report on radio direction finding, later renamed radar, is made
to the Air Defence Research Committee in the United Kingdom.

Following an attempt by dissident Upper Mohmand tribes on the North-West
Frontier, to destroy the Gandab military road and its outposts, No.27
and No.60 Squadrons of the Royal Air Force begin to provide air support
for ground forces attempting to regain control of the region.

The Royal Air Force (RAF) begins a night bombing campaign in Afghanistan.
However, this offensive is reduced as a consequence of the Quetta earthquake
on 31 May. 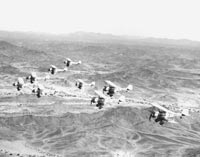 In response to the Italian invasion of Abyssinia from bases in Eritrea
and Somaliland, British military forces in the Middle East are strengthened
and brought to a heightened state of readiness. Eleven Royal Air Force
(RAF) squadrons are despatched from the United Kingdom to stations in
the Mediterranean and Middle East and they remain in the region until
returning to the United Kingdom in August and September 1936.