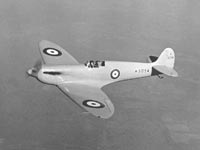 The first prototype of the Vickers Supermarine Spitfire (K5054) makes
its maiden flight at Eastleigh aerodrome, with Vickers test pilot Joseph
‘Mutt’ Summers at the controls.

Air exercises give collective defence training to the Metropolitan Air
Force squadrons. During the exercises, it was assumed for the first time
that attacking forces would enter the United Kingdom airspace over the
seaboard of Southeast England. The exercises were also the first real
test of the Observer Corps.

RAF Halton and RAF Cranwell cease to have the status of independent commands
and are placed under the newly formed RAF Training Command.

The Metropolitan Royal Air Force is reorganised to reflect the demands
of expansion with Air Defence of Great Britain reformed into two role-relevant
commands:

The King’s Flight of the Royal Air Force is officially formed for the
first time.

Royal Air Force Volunteer Reserve (RAFVR) is formed. It is initially envisaged
that the RAFVR would recruit 800 reservists a year for pilot training
between 1936 and 1938 and provision is also made for recruiting 2,500
observer trainees and 3,200 wireless operator (air gunner) trainees. However,
as international tension heightens, recruiting targets sre increased.

The first full-scale trials of a Radio Direction Finding (RDF), or radar,
system are carried out by the Royal Air Force, using experimental equipment
located at Bawdsey Research Station to track Royal Air Force Coastal Command
Avro Ansons operating from RAF Manston and flying boats operating from
Felixstowe. Although the results of the trial are mixed, the Chief of
the Air Staff concludes that they have proved the concept of an RDF system
and justified the development of RDF as part of the air defences of the
United Kingdom.

Following the declaration of a Jihad (holy war) against foreign infidels
by the religious leader the Fakir of Impi, fighting breaks out between
British and Indian Army columns and the Fakir’s forces in the Khaisora
Valley. No.5 and No.27 Squadrons, Royal Air Force, flies air supply missions
in support of the columns. The columns succeed in forcing the Fakir and
his supporters out of the Khaisora Valley and the Fakir goes into hiding.

The Balloon Barrage scheme is announced. Balloon barrages are intended
to deter low-level attacks on important installations by forcing hostile
aircraft to fly above the balloons, to impair the accuracy of hostile
bombers and expose them to anti-aircraft fire for longer periods.

No.60 Squadron fly a series of raids over three days against the Fakir
of Ipi’s fortified camp at Arsol Kot, which had been located on 23 December.
The raids achieve an accuracy of over 60% and Arsol Kot is ruined.