No.24 Squadron introduces the de Havilland Don into service and the Central
Flying School becomes the first unit equipped with the Miles Magister.

The Fakir of Ipi makes repeated attempts to foment unrest against British
colonial rule in India’s North-West Frontier Province. Royal Air Force
squadrons in India mount a wide-ranging campaign of air attacks against
the Fakir and his followers and from 1 July 1937 the Royal Air Force is
sanctioned by the Indian Government to attack any village suspected of
harbouring the Fakir. Although the Fakir continued to be a thorn in the
flesh of the Indian Government, his influence declines during the course
of the Second World War. 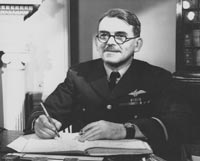 The Bristol Blenheim I enters service with No.114 Squadron. At the time
the aircraft is considered to be the fastest medium bomber in the world.

The first airborne radar is fitted to a Handley Page Heyford based at
Martlesham Heath.

The first air defence radio location (radar) station at Bawdsey Manor
is handed over to the Royal Air Force (RAF).

Flight Lieutenant M.J. Adam of the Royal Air Force establishes a new altitude
record of 53,937 feet while flying a Bristol 138 at Farnborough.

Following an enquiry conducted by the Minister for the
Co-ordination of Defence, Sir Thomas Inskip, Prime Minister Neville Chamberlain
announces the transfer of the Fleet Air Arm from the Royal Air Force to
the Admiralty. 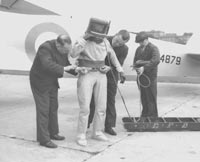 The first successful use of Air-to-Surface Vessel (ASV) radar equipment
occurs when the battleship HMS Rodney and the aircraft carrier HMS Courageous
are located at a range of 5 miles.