20 January
The Air Ministry announces that the Royal Air Force Display at Hendon
will be discontinued, giving the reason that the airfield is too small
for modern aircraft.

10 February
The commanding officer on No.111 Squadron, Squadron Leader J.W. Gillan,
makes headline news when he flies from Edinburgh in Scotland to Northolt
in Middlesex at an average speed of 657kph (408 mph). The night flight
benefited from a strong tail wind.

Hitler orders the German occupation of Austria (the Anschluss). 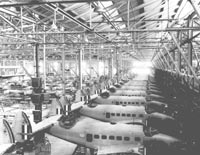 The British Purchasing Commission places orders for United States manufactured
military aircraft on behalf of the Royal Air Force. 200 Lockheed Hudsons,
which are initially intended for service as navigation trainers, but are
subsequently used in the maritime reconnaissance role, and 200 North American
Harvard advanced trainers.

On 20 June, an ‘invasion force’ of Pathan tribesmen under the leadership
of Sayid Muhammed Sadi ‘Shami Pir’, a Syrian with pronounced pro-Nazi
sympathies, begin to move towards the India-Afghanistan border to mount
an invasion of Afghanistan. However, on 22 June three Hawker Audax of
No.20 Squadron, on an armed reconnaissance sortie, sight and immediately
attack Sadi’s lashkar, which subsequently dispersed.

The Civil Air Guard is established to create a reserve of civil pilots
of both sexes, which it willo achieve by subsidising training in light
aeroplane clubs across the country. When the scheme is launched, no fewer
that 35,000 applied for registration, of whom 4,000 were already in possession
of type ‘A’ pilot’s licences. 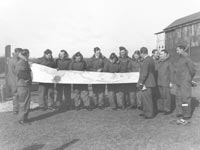 Two Vickers Wellesleys of the Long Range Development Flight fly to Persian
Gulf and back, covering a total distance of 4,300 miles, in 32 hours.

The Supermarine Spitfire enters Royal Air Force squadron service. The
first squadron to receive the Spitfire is No.19 Squadron, stationed at
RAF Duxford. 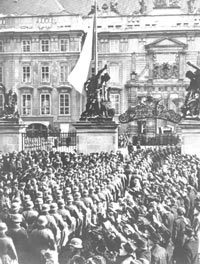 In response to the Munich Crisis, the Royal Air Force introduces a series
of emergency measures to place the service on a war footing. These include
the formation of Mobilisation Pools (the organisation of people into groups
ready to be moved), which is ordered on 27 September.

Balloon Command is formed under the command of Air Vice Marshal O.T. Boyd.

Two Vickers Wellesleys of the Royal Air Force’s Long-Range Development
Flight establish a new world distance record. Flown from Ismailia in Egypt
to Darwin in Australia the two aircraft complete the 11,520 kilometre
(7158 mile) flight in 48 hours. A third Wellesley, flown by the Flight
commander, Squadron Leader R.G. Kellett, is forced to land at Kuepang
in Timor to refuel.