The Auxiliary Air Force Reserve is formed to allow ex-members of the Auxiliary
Air Force to serve with Auxiliary flying squadrons in an emergency.

Reserve Command is formed under the command of Air Marshal C.L. Courtney.

The Secretary of State for Air, Sir Kingsley Wood, announces that the
Royal Air Force will impress civil aircraft in the event of war. 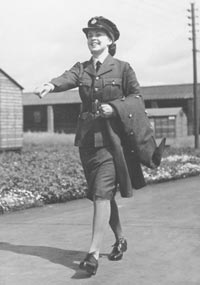 Approximately 240 aircraft of Royal Air Force Bomber Command participate
in a series of navigational exercises, including training flights over
Central and Southern France. These sorties serve as a ‘show of strength’
and also provide valuable training in long-range overseas operations.
At the same time, it is announced that an agreement has been reached with
the French to allow such training flights.

The last major British peacetime exercise takes place, with over 1,300
aircraft taking part in south-east of England and at the end of the practice,
a civilian ‘blackout’ is ordered.

Messages are exchanged between Prime Minister Neville Chamberlain and
Adolf Hitler. Chamberlain warns that the United Kingdom is willing to
use force to aid Poland and Hitler states that he will not renounce Germany’s
claim to Danzig.

Readiness State ‘C’ is declared by the Air Ministry and mobilisation commences.
Aircraft are placed on 12-hour standby and personnel on special leave
are recalled to duty. Auxiliary Air Force and Volunteer Reserve personnel
are ordered to report to their mobilisation centres.

Readiness State ‘D’ is put into force, aircraft are dispersed on their
airfields and all personnel are recalled. ‘E’-Class reservists are also
ordered to report to their units.

The complete mobilisation of British Navy, Army and Air Force is ordered.

At 1100hrs, an ultimatum issued to Germany by the British Government expires
and in a radio address to the nation, Prime Minister Neville Chamberlain
announces, “this Country is at war with Germany”. 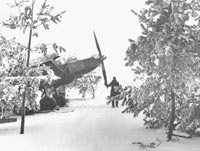 At 1130hrs, air-raid warning sirens sound in the London area for the first
time. However, the warning is a false alarm, triggered by the detection
of a French aircraft, en route to the United Kingdom, that had not filed
a flight plan.

A Bristol Blenheim IV (N6215) of No.139 Squadron is the first Royal Air
Force aircraft to cross the German frontier after war is declared. Between
1200hrs and 1650hrs the Blenheim, flown by Flying Officer A. McPherson,

carries out a photographic and visual reconnaissance of German naval ports.
Although the crew, which includes a naval observer, Commander Thompson,
sight a number of warships in the Schillig Roads off Wilhelmshaven, their
radio is unserviceable and they are unable to report until they return
to Wyton. Flying Officer McPherson is subsequently awarded the Distinguished
Flying Cross.

RAF Bomber Command conducts the Royal Air Force’s first operational sorties
of the Second World War, when eighteen Handley Page Hampdens and nine
Vickers Wellingtons of RAF Bomber Command undertake a search for German
naval shipping. However, they do not locate any targets and all return
safely.

Pilot Officer John Noel Isaac of No.600 Squadron becomes the first Briton
to die in the Second World War when his Bristol Blenheim crashes into
Heading Street in Hendon at 1250hrs, 1 hour 50 minutes after the British
declaration of war.

The first propaganda leaflet raid by Armstrong Whitworth Whitleys of No.51
and No.58 squadrons drops 5.4 million leaflets over targets included Hamburg,
Bremen and the Ruhr.

A message from King George VI to the Royal Air Force on the outbreak of
war:

“The RAF has behind it a tradition no less inspiring than those
of the other Services and in campaigns which we have now been compelled
to undertake you will have to assume responsibilities for greater than
those which your Service had to shoulder in the last War. One of the greatest
of them will be the safeguarding of this Island from the menace of the
air. I can assure all ranks of the Air Force of my supreme confidence
in their skill and courage and their ability to meet whatever calls may
be made upon them.”

Sergeant George Booth, an observer with No.107 Squadron becomes the first
British Prisoner of War when his Bristol Blenheim is shot down over the
German coast.

Following a second reconnaissance sortie by Flying Officer McPherson,
fourteen Vickers Wellingtons of No.9 and No.149 Squadrons and fifteen
Bristol Blenheims of Nos. 107, 110 and 139 Squadrons are despatched to
attack German warships at Brunsbüttel, Wilhelmshaven and the Schillig
Roads. However, five aircraft of each type do not locate their targets.
Ten Blenheims from No.107 and No.110 Squadrons attack the pocket battleship
Admiral Scheer and the cruiser Emden in Wilhemshaven. Three bombs hit
the Scheer but fail to explode.

By a peculiar twist of fate a Blenheim piloted by Flying Officer H.L.
Emden crashes on the deck of the cruiser of the same name. Two of the
Wellingtons fail to find Brunsbüttel and bomb Esjberg in neutral
Denmark, 110 miles north of their intended target. The error presaged
the navigational difficulties which proved to be a consistent problem
for Bomber Command. Flight Lieutenant K.C. Doran of No.110 Squadron is
awarded the Distinguished Flying Cross for his part in this raid.

The first Royal Air Force attack on an enemy aircraft occurs when a Lockheed
Hudson of No.224 Squadron fires on a Dornier Do18 over North Sea.

An Avro Anson of No.500 Squadron makes the first attack on a German submarine,
10 miles north of Ostend.

The first German aircraft sorties occur over the United Kingdom.

A technical fault at the Chain Home Radio Direction Finding (radar) station
at Canewdon, compounded by a series of mistakes within RAF Fighter Command’s
fighter control system, leads to friendly aircraft being plotted as an
incoming air raid.

No.56 Squadron scramble Hawker Hurricanes to intercept this ‘phantom’
raid and are plotted also as hostile. Further squadrons are scrambled
and, tragically, a section of No.72 Squadron (Supermarine Spitfires) misidentifies
two Hurricanes of No.56 Squadron as Messerschmitt Bf109s and shoots both
aircraft down. One pilot, Pilot Officer M.L. Hulton-Harrop, is killed.
The ‘Battle of Barking Creek’, as the events of 6 September later became
known, led to a wholesale review of RAF Fighter Command’s plotting system.

The first engagement between the Royal Air Force (RAF) and the Luftwaffe
takes place, when three Fairey Battles of No.88 Squadron, Advanced Air
Striking Force, are attacked by three Messerschmitt Bf109s of Jagdgruppe
152 west of Saarbrücken. Two Fairey Battles are shot down.

The Royal Air Force’s first dedicated photographic reconnaissance unit,
the Heston Flight, forms at Heston within No.11 Group, RAF Fighter Command.
The commander of the flight, Wing Commander Sidney Cotton, had conducted
a series of clandestine photographic sorties over Germany on behalf of
the Secret Intelligence Service (SIS) as a civilian in the late 1930s.
The Heston Flight is renamed No.2 Camouflage Unit on 1 November in an
effort to disguise its activities.

The first Luftwaffe aircraft is shot down during operations against the
United Kingdom. A Dornier Do18D flying boat of 2/Küstenfliegergruppe
506 is shot down by a Blackburn Skua of No.803 Squadron, Fleet Air Arm,
operating from the aircraft carrier HMS Ark Royal, north of the Great
Fisher Bank. The crew of the Do18 are rescued by the destroyer HMS Somali
and the aircraft, which was still afloat, is sunk by gunfire.

A Royal Air Force Lockheed Hudson of No.224 Squadron, operating out of
RAF Leuchars, shoots down a German Dornier Do18 flying boat of 2/Küstenfliegergruppe
506 25km. This is the first victory recorded of an American-built aircraft
in the Second World War and is the first German aircraft to be destroyed
by a Royal Air Force aircraft operating from Britain.

British warships at Rosyth in the Firth of Forth come under attack from
Junkers Ju88 of Kampfgeschwader 30 flying from Westerland. Three of the
German raiders are brought down, and are the first aircraft destroyed
over British territory in the Second World War. The first German aircraft
to be shot down, is intercepted by Supermarine Spitfires and comes down
in the Firth of Forth near Crail. The pilot, Hauptmann Helmuth Pohle survives
and became a Prisoner of War. The successful pilots of No.602 (City of
Glasgow) Squadron, Auxiliary Air Force, are Flight Lieutenant G. Pinkerton
and Flying Officer A. McKellar.

Two Luftwaffe air raids take place on warships at Scapa Flow and the first
enemy bombs to explode on British soil land on the Island of Hoy in the
Orkneys.

Supermarine Spitfires of No.602 (County of Glasgow) and No.603 (County
of Edinburgh) Squadrons bring down a Heinkel He111 of Stab/Kampfgeschwader
26 near Haddington in Lothian. This is the first enemy aircraft to be
brought down on mainland Britain during the Second World War.

A Hawker Hurricane, piloted by Pilot Officer P.W. Mould of No.1 Squadron,
based at Vassincourt in France, shoots down a Dornier Do17 reconnaissance
aircraft of 2 (Fernaufklärungs)/Aufklarungsgruppe 123. This is Royal
Air Force’s first air combat victory over the Continent during the Second
World War.

The Women’s Auxiliary Air Force has recruited 8,800 and has raised its
upper age limit to 50 years, for women with experience in radar plotting
of aircraft.

The first German bombs fall on British soil. The bombs are dropped on
the Shetland Islands, with no casualties, except an uninhabited house.

The first successful photographic reconnaissance sortie is made by a PR
Supermarine Spitfire. Flight Lieutenant M.V. ‘Shorty’ Longbottom of the
Special Survey Flight, a detachment of No.2 Camouflage Unit, flies Spitfire
I Type A N3071 on a sortie from Coulommiers to photograph the Eupen –
Elsenborn region of northern Luxemburg.

Soviet Forces invade Finland and fighting continues until an armistice
comes into force on 12 March 1940. Despite overwhelming numerical and
technical superiority a combination of poor training and tactics sees
the Red Air Force lose 280 aircraft in air-to-air combat and 314 to ground
defences. Finnish losses total 62 aircraft destroyed in combat and 69
aircraft written off.

German warships at Heligoland are bombed by 24 Royal Air Force Vickers
Wellingtons. A bomb from one of the aircraft hangs up briefly, before
dropping on a German AA battery on shore. This is believed to be the first
British bomb to strike German soil.

Six Vickers Wellingtons of No.99 Squadron, RAF Bomber Command, are lost
from an attacking force of twelve during an attempted raid on the German
Navy cruisers Nurnberg and Leipzig, which have been damaged in a naval
action in the North Sea. The Wellingtons are intercepted by Luftwaffe
Bf109 fighters, which shoot five down into the sea and the sixth crash
lands near Newmarket.

A third repeat air attack on German shipping off Wilhelmshaven and the
Schillig Roads is badly mauled. 12 out of 24 Wellingtons are shot down
and others are badly damaged. This ends the British belief that bombers
operating in daylight can successfully defend themselves by close formation
flying.

The first ‘Gift’ squadron is announced, when Nizam of Hyderabad makes
a donation to the Royal Air Force. No.152 Squadron is subsequently renamed
No.152 (Hyderabad) Squadron.

The first Royal Australian Air Force squadron, No.10 Squadron RAAF, arrives
in Britain for service alongside the Royal Air Force.