With the return of Netherlands Army and Navy aviation units to the Dutch
East Indies, the RAF presence in the colony is gradually drawn down. However,
the reintroduction of forces belonging to the colonial power further spurred
nationalist discontent and worsened the already fragile internal security
situation within this Dutch colony and as a consequence, the remaining
RAF squadrons were required to step up the number of operational sorties
flown. RAF units no longer required to police the colony were either redeployed
to Malaya or disbanded in situ.

Air Commodore Frank Whittle submits his resignation from the Board
of the nationalised company charged with jet engine research, Power Jets
(Research and Development) Ltd, following disagreements as to the future
role of the company. Air Commodore Whittle subsequently retired from the
Royal Air Force (RAF) on medical grounds on 13 April 1948 and was knighted
in July of that year.

Cabinet Committee GEN75 approves the construction of the first atomic
pile to be established in the United Kingdom and the creation of an establishment
at the former RAF station at Harwell in Oxfordshire to carry out research
into all aspects of atomic energy. This decision marked the genesis of
British nuclear weapons research and development.

31 January
It is announced that Royal Air Force (RAF) squadrons will be included
in the air component of the British Commonwealth Occupation Force (BCOF)
in Japan.
28 February

As part of a series of terrorist attacks against British military installations
on this night, members of the Irgun organisation raid the RAF stations
at Petah Tiqva, Qastina and Lydda. 7 Supermarine Spitfire LF9s of No.32
and No.208 Squadrons were destroyed or seriously damaged at Petah Tiqva
and a further 6 Handley Page Halifax VIIs of No.644 Squadron were destroyed
at Qastina with five Halifax IXs subsequently written off as beyond economic
repair. 2 Avro Ansons were destroyed at Lydda.

As part of the demobilisation of the Royal Air Force (RAF), the Under
Secretary of State for Air, Mr John Strachey, announced that 742,000 of
the RAF’s personnel strength of 1,100,000 would be released from the Service
by 30 June 1946.

The last British troops leave French Indo-China, ending British involvement
in the area. No.273 Squadron had been disbanded on 31 January and No.267
Squadron returned to Burma. The Gremlin Task Force also disbanded at the
end of January 1946, having flown over 2,000 sorties.

The Central Flying School is reformed at RAF Little Rissington under the
command of Group Captain E.A.C. Britton.

The Air Ministry announces that the Auxiliary Air Force is to be reformed.
It was initially intended that the new force would consist of 13 day fighter,
3 nightfighter and 4 light bomber squadrons.

The Air Ministry announces that the RAF Regiment is to continue as an
integral part of the Royal Air Force (RAF). It was envisaged that the
RAF Regiment would consist primarily of rifle, armoured and light anti-aircraft
(LAA) squadrons and the regiment would also to acquire a parachute capability. 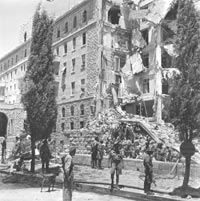 The King David Hotel in Jerusalem is destroyed by a bomb planted by Jewish terrorists. The hotel housed the headquarters of British forces in Palestine.
91 of the occupants were killed and 45 injured; 28 of the casualties were
British.

The first Operational Requirement (OR) for a British atomic weapon is
issued. OR1001 called for the development of an air-dropped fission weapon,
not exceeding 10,000 pounds in weight, which could be released at altitudes
of between 20,000 and 50,000ft and speeds of between 150 and 500 knots.

A new world speed record of 615mph is established by Group Captain E.H.
Donaldson of the RAF High Speed Flight, while flying a Gloster Meteor
IV over Littlehampton.

The Royal Dutch Indies Army-Army Aviation (KNIL-ML) and the Marine Luchtvaart
Dienst (MLD) assumed formal responsibility for the provision of air support
to Dutch forces in the Netherlands East Indies.

No.31 Squadron (Douglas Dakotas) disbanded at Kemajoram. During the year
that No.31 Squadron was based in the Netherlands East Indies, the Dakotas
of this squadron flew over 11,000 sorties, carrying 127,800 passengers
and 26,000 tons of freight.

The Controller of Production, Atomic Energy, Lord Portal (formally Chief
of the Air Staff) writes to Prime Minster Clement Attlee, advising him
that a decision with regard to the development of atomic weapons by the
United Kingdom was now required. Lord Portal’s note was discussed by Cabinet
Committee GEN163 on 8 January 1947. The committee concluded that the United
Kingdom should commence research into the design and construction of an
atomic weapon.