From 1948 onwards Royal Air Force (RAF) units in Aden supported a number of operations mounted by the British Army and the Aden Protectorate Levies, in an effort to resolve local disputes and to combat attempts to extort travellers using the trade routes through Aden.

January
In response to tribal unrest within the United Nations mandated territory of Somaliland, No.6 Squadron (Hawker Tempest F6) deploys from Fayid to Mogadishu to fly a series of demonstration sorties. No.6 Squadron’s efforts were subsequently augmented by a detachment of Tempest F6s belonging to No.8 Squadron, which operated from Hargeisa during March 1948.

23 March
A new world altitude record of 59,446 feet is established by Group Captain J. Cunningham in a de Havilland Vampire powered by a de Havilland Ghost jet engine at Hatfield near London.

April – November
A detachment of Hawker Tempest F6 fighter-bombers from No.39 Squadron is despatched from Khartoum in Sudan to Asmara in Eritrea to help counter guerrilla attacks mounted by Shifta bandits. The primary task of the detachment was to fly armed reconnaissance sorties in support of ground forces but they also conducted rocket attacks against rebel bases.

19 April
An Anglo-French military air transport agreement is concluded, regularising flights by British and French military aircraft over both countries and providing for the servicing of such aircraft at Royal Air Force (RAF) and Armee de l’Air bases.

15 May
The state of Israel is established and hostilities between the Israeli armed forces and those of Egypt, Syria, Lebanon, Transjordan and Iraq immediately break out.

22 May
During the final stages of the British evacuation from Israel, the RAF station at Ramat David is attacked in error by Supermarine Spitfires of No.2 Squadron, Royal Egyptian Air Force. During the course of three separate attacks on the station, two RAF Spitfires of No.32 Squadron were destroyed and a further eight Spitfires of No.32 and No.208 Squadrons damaged. Additionally, a Douglas Dakota of No.204 Squadron was destroyed and a further two Dakotas and three Auster OP6s damaged. Four Egyptian aircraft were shot down by RAF Spitfires and a fifth by anti-aircraft fire.

16 June
Following serious rioting and social unrest in early 1948, Sir Edward Gent, the High Commissioner for the Federation of Malaya, declares a state of emergency. The Malayan Communist Party was subsequently banned on 23 July. This marked the beginning of the Malayan Emergency (Operation Firedog). Operation Firedog represented a major commitment for the Royal Air Force (RAF). A total of fifteen RAF squadrons served in Malaya at some stage of the emergency and many more United Kingdom-based units took part in temporary detachments to Malaya.

24 June
Soviet forces in the Eastern Zone of Germany stop all rail and road passenger and freight traffic between the British, United States and French Zones of Berlin and the corresponding Allied Zones in western Germany. 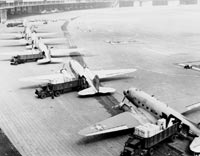 The Douglas Dakotas of No.46 Group begin to airlift essential supplies from the British Zone of Germany to the British garrison in Berlin (Operation Knicker). Subsequently, on the following day, the airlift was widened in scope to include supplies for the civilian population of West Berlin and allocated a new name, Operation Carter Patterson.

However, following Soviet observations that Carter Patterson was actually the name of a British removals company, this suggesting that the British were planning to leave Berlin, the name of the operation was changed to Operation Plainfare on 3 July.

5 July
Short Sunderland flying boats of No.201 and No.230 Squadrons, RAF Coastal Command, join the Berlin Airlift, flying between Hamburg and the Haval See in Berlin.

6 July
The Royal Air Force (RAF) flew its first offensive mission of Operation Firedog, when Supermarine Spitfires of No.60 Squadron attacked and destroyed a communist terrorist camp in Perak in Malaya.

16 July
The 3rd Air Division (Provisional) is established at RAF Marham to control United States Air Force (USAF) B29 Superfortress bomber units posted (on a rotational basis) to the United Kingdom. This marked the return of the USAF to the United Kingdom, and was the first occasion on which US combat forces were stationed permanently in a major friendly foreign country in peacetime. Subsequently, the Division’s provisional status was dropped on 23 August and it relocated from Marham to Bushy Park, the home of the wartime US Strategic Air Forces headquarters, on 8 September.

17 August
Unrest within Somaliland, triggered by the announcement that the disputed Ogaden territory was to be transferred to Ethiopia, leads to the despatch of No.213 Squadron (Hawker Tempest F6) from Deversoir to Mogadishu in order to ‘fly the flag’ and assist in restoring order.

2 October
Following the withdrawal of the last British troops from the Odagen region of Somaliland on 23 September, No.213 Squadron leaves Mogadishu and returns to Deversoir.

20 November
A de Havilland Mosquito PR34 of No.13 Squadron RAF is shot down by a North American P51 Mustang of No.101 Squadron Israeli Air Force during a reconnaissance sortie from Fayid in the Canal Zone.