3 January
The United Kingdom-based US 3rd Air Division is transferred from United States Air Forces in Europe (USAFE) to United States Air Force (USAF) headquarters and assumes the status of a major air command. From this date, USAF Boeing B29 Superfortress operations from the United Kingdom came under the control of the Strategic Air Command (SAC).

30 January
The 60,000th landing by an aircraft of the Combined Airlift Task Force (CALTF) is made at RAF Gatow in Berlin.

1 February
The Women’s Royal Air Force (WRAF) is established, replacing the Women’s Auxiliary Air Force (WAAF) and marking the formal creation of women’s branches within, rather than as an adjunct to, the Royal Air Force (RAF). During a ceremony in the Air Council Chamber on 31 January 1949, the Chief of the Air Staff, Marshal of the Royal Air Force Lord Tedder, noted, “I was going to say ‘welcome’, but all of us in the regular Service throughout the war and since have always, I think, regarded the WAAF as very much an integral part of the Service…. In addition to being a part of our Service in the workshop on the tarmac, in the air and in the office you are now part of our Service in the book. Good show!”

21-26 April
The Amethyst incident: Short Sunderlands of No.88 Squadron Royal Air Force, captained by Flight Lieutenant Ken Letford, make a series of relief flights under fire to the Royal Navy Frigate HMS Amethyst. On 20 April 1949, the Amethyst, then acting as the Royal Navy guardship to the diplomatic community at Nanking, had been shelled by Chinese Communist artillery batteries on the River Yangtse between Shanghai and Chinkiang. She had been forced aground with extensive damage, and suffered numerous casualties, including the Captain and First Officer; moreover, the ship’s medical officer had been killed. Although heavy fire prevented rescue attempts by the Royal Navy, Flight Lieutenant Letford and his crew succeeded in flying in vital supplies, including an RAF medical officer, Flight Lieutenant M.E. Fearnley, a Royal Navy chaplain and crewmembers’ replacements.

For their gallantry under fire, Flight Lieutenant Letford was awarded a Bar to his Distinguished Flying Cross and his crew were awarded the Naval General Service Medal. The Amethyst subsequently succeeded in breaking out and rejoining the Far East Fleet on the night of 30/31 July 1949. 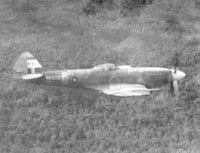 In light of the civil war then raging in China, No.28 Squadron (Supermarine Spitfire FR18), under the command of Squadron Leader R.D. Yule, leaves Malaya in order to reinforce the defences of Hong Kong.

12 May
The Berlin Blockade is officially raised. During the Airlift, the Royal Air Force (RAF) flew 18,205,284 miles on 49,733 flights and carried 281,727 short tons of freight into Berlin and 29,532 short tons out of the capital. 67,373 passengers had also been carried. Despite the lifting of the blockade, the Airlift continued until October in an effort to build up stocks in Berlin.

1 June
RAF Mediterranean/Middle East is renamed the RAF Middle East Air Force (MEAF). Formations under the command included AHQ Malta at Valetta, AHQ Iraq at Habbaniya, AHQ East Africa at Nairobi, Headquarters British Forces in Aden at Steamer Point and No.205 Group, with its headquarters at Fayid. Headquarters MEAF was located at Ismailia with the rear headquarters at Abu Sueir.

23 September
The last Royal Air Force (RAF) Douglas Dakota sortie of the Berlin Airlift flies into Gatow. The aircraft in question, Dakota KN652, bore the following inscription, “Positively the last load from Lübeck – 73,705 tons. Psalm 21, Verse 11. ‘For they intended evil against thee. They imagined a mischievous device which they were not able to perform’.”

1 October
Following the conclusion of an agreement between Britain, the USA and the Bahamas, a guided-missile range was established at Cape Canaveral, under the control of the United States Air Force (USAF) Long Range Proving Ground Division.

6 October
The last Royal Air Force (RAF) base opened with the specific aim of supporting the Berlin Airlift, RAF Schleswigland, is closed.