29 January
In response to the outbreak of the Korean War, the Prime Minister, Mr Clement Attlee, announces plans to improve the United Kingdom’s military preparedness and expedite the British rearmament programme. Proposals included recalling reservists from all three armed services for training, the calling-up of Royal Auxiliary Air Force fighter squadrons for refresher courses and increases in the procurement and production of equipment for the armed forces.

The first Royal Air Force (RAF) aircrew are posted to serve with No.77 Squadron, Royal Australian Air Force (RAAF), during the Korean War. RAF aircrew were initially attached to No.77 Squadron in order to convert RAAF pilots from the North American P51 Mustang to the Gloster Meteor F8. Subsequently, the squadron flew ex-RAF Meteor F8s in action from June 1951 to the end of the war.

Unfortunately, combat experience revealed the Meteor to be outclassed by the jet fighter flown by the North Korean Air Force and its Soviet and Chinese Air Force ‘advisors’ – the Mikoyan-Gurevich MiG15 – and after initial use as a fighter the Meteor was re-roled as a fighter-bomber.

A total of 32 RAF pilots served with No.77 Squadron in Korea. 4 pilots were killed in action, one was killed in a flying accident and one was made a prisoner of war. 4 RAF pilots were awarded Distinguished Flying Crosses, 6 were mentioned in despatches and 4 were awarded Air Medals by the United States of America.

21 February
English Electric Canberra B2 ‘WD932’ makes the first direct unrefuelled crossing of the Atlantic. The aircraft was flown by a crew from the Aeroplane and Armament Experimental Establishment at RAF Boscombe Down and commanded by Squadron Leader A.E. Callard.

April
No.208 Squadron withdraws from Eritrea.

25 May
The first example of the first jet bomber to enter RAF squadron service, the English Electric Canberra B2, is delivered to No.101 Squadron, RAF Binbrook, by English Electric’s chief test pilot, Wing Commander R.P. Beamont.

June
Following the nationalisation of the Anglo-Iranian Oil Company by the Iranian government, Royal Air Force (RAF) Transport Command aircraft are deployed to Fayid to prepare for a possible airlift of British troops and civilians. Air cover for such an eventuality was to be provided by No.6 and No.249 Squadrons (de Havilland Venom) and No.8 Squadron (Bristol Brigand). Although the British Overseas Airways Corporation (BOAC) did evacuate 900 civilians from Abadan between 7-27 June. The services of the RAF were not required.

July
No.8 Squadron withdraws from Eritrea.

4 July
It is announced that the British Air Forces of Occupation in Germany, formerly an independent commander under the Air Ministry, is to be placed under the operational control of Headquarters, Allied Air Forces Central Europe.

9 July
The formal state of war between Britain and Germany is terminated at 1600hrs. 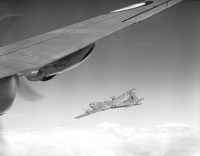 22 August
The Supermarine Attacker enters service with Fleet Air Arm’s No.800 Squadron at Ford Sussex. It is the first jet fighter to be standardised in the Fleet Air Arm’s first-line squadrons.

1 September
The highest Royal Air Force (RAF) command formation within Germany, British Air Forces of Occupation, reverted to its earlier wartime designation of Second Tactical Air Force, a name which more closely represented the role of the formation as a tactical air force within the North Atlantic Treaty Organisation (NATO). 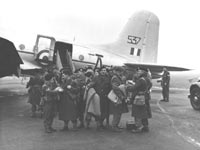 The Egyptian Government abrogate a 1936 treaty relating to the presence of British forces in the Suez Canal Zone. As fighting broke out around the British bases in the Canal Zone, 16 Independent Parachute Brigade was flown from Cyprus aboard the Vickers Vikings of Nos. 70, 78, 114, 204 and 216 Squadrons RAF to support the units stationed in the Canal Zone.

1 November
Between this date and 31 March 1955, the Canadair Sabre fighters of No.1 Fighter Wing, Royal Canadian Air Force, are based at RAF North Luffenham on North Atlantic Treaty Organisation (NATO) duties. The Wing consisted of three fighter squadrons, Nos. 410, 439 and 441 Squadrons RCAF, all of which relocated to airfields in Germany and France during 1954-55. All three squadrons had served in the day fighter, night fighter, or fighter-bomber roles in the United Kingdom during the Second World War.

15 November
RAF North Luffenham, Rutland is handed over to No.1 Fighter Wing of the Royal Canadian Air Force (RCAF).