27 January
A point to point record between London and Mauripur in Karachi is set up by Flight Lieutenant L.M. Whittington and Flight Lieutenant J.A. Brown in an English Electric Canberra covering 3,921 statute miles in 8 hours 52 minutes 28 seconds.

1 February
No.194 Squadron RAF is reformed at RAF Sembawang in Singapore, from the Far East Air Force Casualty Evacuation Flight. This squadron was the first operational RAF helicopter squadron.

4 February
Aircraft from RAF Transport Command in Britain and Second Tactical Air Force in Germany are sent to take part in rescue operations in flooded areas in Holland.

March
Following the failure of negotiations with regard to the presence of a Saudi Arabian party at Hamasa, an air blockade is imposed. The blockade was initially enforced by the de Havilland Vampires of No.6 Squadron – these were subsequently replaced by Gloster Meteor FR9s of No.208 Squadron, which were in turn superseded by the Avro Lancasters of Nos. 37, 38 and 683 Squadrons and the Avro Ansons of No.1417 Flight. The Saudi Arabians withdrew on 15 August 1954.

1 March
Operation Bold: in an effort to bolster air support for ongoing internal security operations within Malaya, the programme of despatching Avro Lincoln 2B bombers of RAF Bomber Command squadrons to the Far East resumes with the arrival of a detachment from No.83 Squadron at Tengah. Further detachments were subsequently provided by No.7 and No.148 Squadrons and the final detachment left Tengah for the United Kingdom on 1 March 1955.

12 March
An Avro Lincoln bomber of the Central Gunnery School, RAF Flying Training Command, is shot down by Soviet Air Force Mikoyan-Gurevich MiG15 fighters during a training flight from Leconfield in Yorkshire, with the loss of seven lives. Due to a navigation error, the Lincoln had inadvertently strayed into the Soviet Zone of Germany during a routine fighter affiliation exercise.

23 March
No.1340 Flight RAF moves from Thornhill in Rhodesia to RAF Eastleigh to commence intensive anti-terrorist operations in Kenya in support of the British Army. The Flight was equipped with North American Harvard IIB advanced trainers, previously used by the Rhodesian Air Training Group, armed with 20 pound fragmentation bombs.

4 May
An English Electric Canberra flown by Wing Commander W.F. Gibb from Filton near Bristol, establishes a new altitude record of 63,668 feet.

4 May
On successfully completing flying training, Duke of Edinburgh is presented with his wings by the Chief of the Air Staff, Air Chief Marshal Sir William Dickson.

15 July
The Coronation Review of the Royal Air Force (RAF) takes place at RAF Odiham. The centrepiece of the review was a fly-past by some 640 aircraft, including 440 jet aircraft, under the command of Air Vice Marshal the Earl of Bandon.

27 July
An armistice agreement is concluded at Panmunjom between the Commander-in-Chief, United Nations Command, General Mark W. Clark of the United States Army, the Supreme Commander of the Korean People’s Army, Kim Il Sung, and the Commander of the Chinese People’s Volunteers, Peng Teh-Huai, with the aim of bringing about “a complete cessation of hostilities and of all acts of armed force in Korea until a final peace settlement is achieved.” The armistice was signed at 1012hrs and became effective at 2200hrs.
1 August
The Bomber Command Armament School (BCAS) is formed at RAF Wittering. The BCAS was charged with training RAF personnel in the custody, storage, servicing, transportation and use of nuclear weapons. The first commander of the School was Wing Commander J.S. Rowlands.

31 August
The first crop-spraying operation undertaken by British forces in Malaya (Operation Cyclone I) begins. Modified Sikorsky S51 and S55 helicopters were used to spray herbicide on jungle clearings used by the terrorists to cultivate food. During Cyclone I, over 30 clearings were sprayed and one terrorist killed in associated ground force operations. A second series of crop-spraying sorties (Operation Cyclone II) quickly followed and by the end of 1953 a total of 88 clearings had been sprayed. However, due to the paucity of helicopters spraying operations were held in abeyance after 1954.

7 September
A new world speed record is established by Squadron Leader N.F. Duke, who averaged a speed of 727mph in runs over a 3 kilometre course at Littlehampton in Sussex, while flying a Hawker Hunter.

19 September
A new world speed record of 709mph over a 100 kilometre closed course is established by Squadron Leader N.F. Duke in a Hawker Hunter at Dunsfold in Surrey.

7 & 14 November
The first atomic bombs for the Royal Air Force (RAF) are delivered to the Bomber Command Armament School at RAF Wittering. 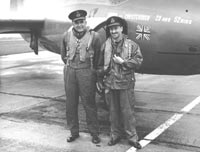 14 October
The second British atomic test, Totem/T1, takes place when a 10 kiloton atomic weapon is detonated on top of a 31 metre tower. In Operation Hotbox, an English Electric Canberra entered the atomic cloud 6 minutes after the explosion to assess the behaviour of the aircraft and the effects of the cloud on the crew. Subsequently, between 1952 and 1958 RAF squadrons operating modified English Electric Canberras were called upon to conduct extensive sampling sorties in support of the United Kingdom’s atmospheric nuclear test programme.

27 October
The Duke of Edinburgh is appointed Honorary Air Commodore of No.601 (County of London) Squadron, Royal Auxiliary Air Force, in succession to Marshal of the Royal Air Force Lord Douglas of Kirtleside.

11 November
The first detachment of Avro Lincoln heavy bombers arrives at RAF Eastleigh in Kenya, to supplement the North American Harvards of No.1340 Flight. RAF Bomber Command squadrons based in the United Kingdom would continueto furnish

detachments for operations in Kenya until July 1955. The Lincolns were used to pattern bomb known terrorist camps and operating areas.

1 December
AHQ Malta ceased to be controlled by Headquarters, Middle East Air Force, which became an independent Air Headquarters under the control of the Air Ministry.