1 January
Air Chief Marshal Sir Dermot Boyle succeeds Marshal of the Royal Air Force
Sir William Dickson as Chief of the Air Staff. Sir Dermot was the first
graduate from the RAF College to be appointed to this post.

15 January
AHQ Cyprus is disbanded and AHQ Levant is transferred from Habbaniya in
Iraq to Nicosia in Cyprus with effect from this date.

Marshal of the Royal Air Force Viscount Trenchard of Wolfeton dies at his home
in London, aged 83. He is buried in the Battle of Britain Chapel at Westminster
Abbey.

15 April
Headquarters, No.205 Group is disbanded.

16 May
A British atomic device is detonated on Monte Bello Islands.

13 June
The United Kingdom completes the withdrawal of its troops from Egypt,
ending 74 years of British military presence in the country.

2 August
Following the nationalisation of the Suez Canal by Egypt on 26 July 1956,
preparations commence for operations to seize the Canal by force. It was
announced that RAF English Electric Canberra jet bombers would be despatched
from the United Kingdom to Cyprus and that British reservists would be
called up.

2 September
The first direct transatlantic flight by a ‘V-bomber’, a Vickers Valiant,
is made between Lowring Air Force Base in Maine and RAF Marham in a time
of 6 hours 25 minutes.

9 September
Operation Tasman Flight: the first Avro Vulcan to be taken on charge by
the RAF, Vulcan B1 XA897, departs from Boscombe Down en route to Melbourne
in Australia via Aden and Singapore. The aircraft was flown by Squadron
Leader D.R. Howard, with Air Marshal Sir Harry Broadhurst, Air Officer
Commanding in Chief, Bomber Command, as a member of the crew. The aircraft
arrived at Melbourne on 11 September after a total flight time of 23 hours
15 minutes. The aircraft subsequently toured Australia and New Zealand
and took part in the 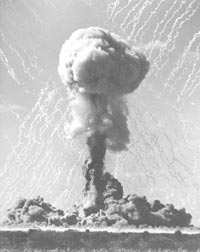 1 October
Avro Vulcan B1 XA897 departs Aden at 0250hrs on the final leg of its return
journey from Australia to the United Kingdom, captained by Squadron Leader
Howard and with Sir Harry Broadhurst flying as co-pilot. Unfortunately,
the aircraft encountered extremely poor weather conditions while attempting
to land at Heathrow airport and crashed on approach. The pilot and co-pilot
successfully ejected, but the four crewmembers in the rear of the aircraft
were killed.

11
October
The first British atomic weapons trial to involve the delivery of the
weapon from an aircraft, Buffalo/R3, takes place at the Kite site on the
Maralinga range in South Australia. Vickers Valiant WZ366 of No.49 Squadron,
flown by a crew of six and captained by Squadron Leader E.J.G. Flavell,
dropped a Blue Danube round modified to produce a yield of 3-4 kilotons
– the weapon was released from 30,000 feet.

15 October
The Nicosia Helicopter Flight is separated from the Royal Air Force (RAF)
Levant Communications Flight to form No.284 Squadron. The squadron was
equipped with Bristol Sycamore helicopters and tasked with supporting
British Army units conducting internal security operations against EOKA
terrorists seeking the union of Cyprus with Greece.

29 October
The Israeli Army launches an attack on Egyptian positions in the Sinai
Peninsula, with the object of destroying Egyptian Commando (Fedayen) bases
from which raids had been made on Israel (Operation Kadesh). The Israeli
attack was also intended to provide the British and French Governments
with a pretext for a military intervention to seize the Suez Canal.

30 October
Following the Israeli invasion, the British and French Governments presents
an ultimatum to both Israel and Egypt demanding the cessation of hostilities
within twelve hours. Troops from both combatants were to be withdrawn
to positions ten miles east (Israel) and west (Egypt) of the Suez Canal.
Additionally, the Egyptian Government was required to allow British and
French forces to be stationed at Port Said, Ismailia and Suez, in order
to safeguard shipping passing through the canal. These terms were accepted
by Israel and rejected by Egypt.

31 October
Following the Egyptian Government’s rejection of the ultimatum presented
by Britain and France and its closure of the Suez Canal, British and French
forces commence military operations against Egypt (Operation Musketeer).
Twelve Egyptian airfields in the Canal Zone and the Nile Delta were attacked
by English Electric Canberra and Vickers Valiant bombers – the first time
that an element of the ‘V-force’ had been used operationally. The first
phase of the assault, between October 31 and November 1, was designed
to destroy or neutralize the Egyptian Air Force, which was broadly achieved.

5 November
Operation Musketeer: key points in the Canal Zone are seized by Anglo-French
airborne forces as a preliminary to a major seaborne assault with the
aim of gaining control of the Suez Canal.

Bowing to intense international political and economic pressure, at
1800hrs the British Prime Minister, Sir Anthony Eden, announces that following
the acceptance of a cease-fire between Egyptian and Israeli forces and
Egypt’s agreement to the deployment of a United Nations force to safeguard
the Suez Canal, the British and French Governments would order a cease-fire
by midnight 6 November. United Nations forces began to arrive in Egypt
on 14 November and the last allied troops withdrew on 23 December 1956.