February
As part of the United Kingdom’s commitment to support the Baghdad Pact,
the first Royal Air Force (RAF) English Electric Canberra squadron to
join the Middle East Air Force (MEAF), No.32 Squadron, is deployed to
RAF Akrotiri. A further three squadrons of Canberras, Nos. 73, 6 and 249
Squadrons, were subsequently deployed to Akrotiri during March, July and
November 1957 respectively.

Collectively, the squadrons were designated the MEAF Strike Wing, then
North East Air Force (NEAF) Strike Wing after February 1961. They were
supported by No.13 Squadron, a photographic reconnaissance squadron equipped
with Canberra PR7s. The NEAF Strike Wing acquired a nuclear capability
during 1961-62.

4 April
Following the publication of a United Kingdom government White Paper on
Defence it is decided that the days of manned aircraft are drawing to
a close soon to be superseded by advanced interception and bombardment
missiles. Britain chooses to concentrate upon deterrence by threat of
nuclear retaliation. 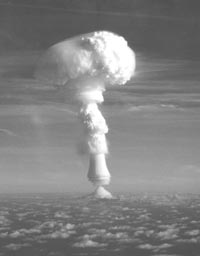 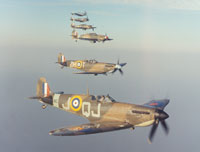 the first of a series of tests known as Operation Grapple, Britain’s first
thermonuclear weapon, a prototype Yellow Sun, is dropped over Malden Island
in the South West Pacific by Vickers Valiant XD818 of No.49 Squadron,
captained by Wing Commander K. Hubble. The yield of the weapon was 100-150
kilotons.

Following a hiatus between 1953 and 1956, RAF Bomber Command resumes its
participation in the United States Air Force (USAF) Strategic Air Command
Bombing and Reconnaissance Competition. Three Avro Vulcan and two Vickers
Valiant bombers and their crews participate in the competition, which
is held at Pinecastle Air Force Base in Florida.

Despite problems with the Navigation and Bombing System (NBS) aboard
the RAF’s Vulcans and Valiants, a crew from No.214 Squadron RAF commanded
by Squadron Leader R.W. Payne finished eleventh of the 90 crews competing.

31 October
Intermittent detachments of Vickers Valiant B1 and Avro Vulcan B1 medium
bombers from RAF Bomber Command squadrons to RAF Changi begin (Operation
Profiteer). Aircraft were detached to the Far East for periods of two
weeks every three months between this date and 26 June 1960. The detachments
also operated from RAF Butterworth from 6 June 1958. ‘V-force’ detachments
did not fly offensive sorties in support of internal security operations
in Malaya (Operation Firedog), but undertook practice attacks on the Song
Song and China Rock ranges and ‘flag-waving’ sorties with the aim of demonstrating
the RAF’s capability to project power in defence of the Commonwealth.