1 January
Air Chief Marshal Sir Dermot Boyle, the Chief of the Air Staff, is promoted
to Marshal of the Royal Air Force.

22
February
An agreement is concluded between the United Kingdom and the United States
with regard to the installation of 60 Thor Intermediate Range Ballistic
Missiles in eastern Britain for a 5-year periodUnder the terms of the
agreement, the USA was to furnish the missiles and their warheads, while
the United Kingdom was to provide the operating sites and associated installations. 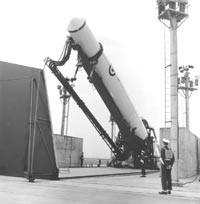 The missiles were to be operated and maintained by Royal Air Force (RAF)
personnel and launching the missiles was to be via a ‘dual key’ system
involving RAF and United States Air Force (USAF) officers.

April – May
Operation Quick Flight: in light of the worsening relationship between
the United Kingdom and Guatemala with regard to the status of British
Honduras, a Royal Visit is conducted by Princess Margaret to demonstrate
the United Kingdom’s commitment to preserve the integrity of the Crown
Colony. The Vickers Viscount carrying Princess Margaret was escorted by
two armed Canberra B(I)8 interdictors of No.59 Squadron, with two Canberra
PR9s of No.58 Squadron acting as navigation leaders.

1 April
The command structure in the Middle East is once again reformed:

Thus, the changes made on this date rationalised the division of command
between the Mediterranean and Gulf regions by establishing two separate
Commands reporting independently to the Air Ministry – MEAF and BFAP.

9 April
The two-man crew of a Canberra bomber which explodes over Derbyshire make
the highest recorded, emergency escape from an aircraft at 17,070 metres
(56,000 feet)

14-20 May
United Stated Air Force (USAF) Strategic Air Command participate in the
RAF Bomber Command bombing competition for the first time. 6 Boeing B52
Stratofortress aircraft and crews of the 92nd Bomb Wing were detached
to RAF Brize Norton for the competition. The detachment won 5 of the 6
awards for which it was eligible.

16 July
Following the overthrow and assassination of King Feisal of Iraq, the
United Kingdom received an appeal for assistance from HM King Hussain
of Jordan. In response, the United Kingdom mounted Operation Fortitude.
16 Parachute Brigade Group was flown from Cyprus to Jordan by the Royal
Air Force and air support was provided by the deployment of No.208 Squadron
(Hawker Hunter F6) to Amman. British forces were withdrawn by 2 November
1958.

The Church of St. Clement Danes on the Strand in London is reconsecrated as
the Church of the Royal Air Force in the presence of Queen Elizabeth II.