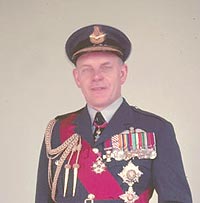 the conversion of the post of Chairman of the Chiefs of Staff Committee
to that of Chief of the Defence Staff, the then Chairman, Marshal of the
Royal Air Force Sir William Dickson, became the first Chief of the Defence
Staff. Sir William relinquished this post on 16 July 1959, being succeeded
by Admiral of the Fleet Lord Mountbatten of Burma.

1 April
RAF Home Command is disbanded and control of the Air Training Corps is
passed to Flying Training Command and subsequently to the Air Ministry.

16 April
The first launching of a Thor Intermediate-Range Ballistic Missile by an RAF
crew under training (drawn from No.98 (SM) Squadron, RAF) takes place
at Vandenberg Air Force Base in the USA. 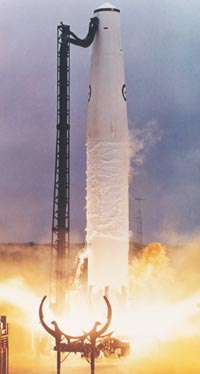 15 May
The Royal Air Force’s last flying boat sorties are flown by two Short
Sunderlands of No.205 Squadron, RAF Seletar.

9 June
The first non-stop flight between the United Kingdom and Cape Town is
made by a Vickers Valiant of No.214 Squadron captained by Wing Commander
M.J. Beetham and covers a distance of 6,060 miles in 11 hours 28 minutes,
achieving an average speed of 530mph. The aircraft was refuelled in flight
twice.

22 July
The Daily Mail Blériot Anniversary Air Race between London and
Paris is won by a team led by Squadron Leader C.G. Maughan, the commanding
officer of No.65 Squadron. Squadron Leader Maughan completed the course
between Marble Arch and the Arc de Triomphe in Paris, in a time of 40
minutes 44 seconds, travelling by Royal Air Force Police motorcycle, Bristol
Sycamore Helicopter and Hawker Hunter T7. The prize money of £6,500
was donated to charity.