January
The Hawker Hunter is introduced into Aden with No.8 Squadron. Fleet Air
Arm aircraft operating in Aden waters also began to participate in attacks
against targets in Aden and Yemen from March of this year.

1 January
No.38 Group is reformed under the command of Air Vice Marshal P G Wykeham
as a specialist tactical group within RAF Transport Command.

Air Minister announces that a Ballistic Missile Early Warning Station
is to be established at Fylingdales in Yorkshire. The station was to be
commanded and operated by the Royal Air Force and was scheduled to commence
operations in 1963.

An agreement is reached between the President of the USA and the Prime Minister
with regard to British participation in the Douglas Skybolt air-launched
ballistic missile (ALBM) development and acquisition programme. British
participation in the programme was based upon the production of Skybolt
for the Royal Air Force – the missile was to be carried by modified Vulcan
aircraft.

1 May
Following the example set by the inter-Service command established in
the Persian Gulf on 1 October 1959, a unified Middle East Command is introduced.
The Middle East Air Force became the Royal Air Force element of this new
command.

25-26 May
The first non-stop flight between the United Kingdom and Singapore is
made by a Vickers Valiant of No.214 Squadron, captained by Squadron Leader
J.H. Garstin. The Valiant covered a distance of 8,110 miles in 15 hours
35 minutes, achieving an average speed of 623 mph and was refuelled in
flight over Cyprus and Karachi.

July
de Havilland Comets (No.216 Squadron), Bristol Britannias (No.99 and No.511
Squadrons) and Blackburn Beverleys (No.30 Squadron) of RAF Transport Command
fly Ghanaian troops and their equipment from Accra to Leopoldville in
order to participate in the United Nations force in the Congo. Two Handley
Page Hastings of No.114 Squadron subsequently supported the Ghanaian contingent.

31 July
The Malayan Emergency is declared at an end. During Operation Firedog,
Far East Air Force aircraft flew 375,849 sorties, during which they covered
a distance of approximately 47,500,000 miles in 361,442 flying hours. 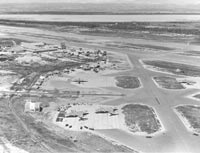 Cyprus becomes a Republic and administration of the Sovereign Base Areas of Akrotiri
and Dhekelia are passed to Air Officer Commanding in Chief, Middle East
Air Force.

September
In an effort to guard against local disturbances during a forthcoming
plebiscite with regard to the constitutional status of the Cameroons,
No.1 Battalion of The King’s Own Border Regiment are flown into the country.
They were subsequently supported by a detachment of three Scottish Aviation
Twin Pioneers from No.230 Squadron. The troops were withdrawn in September
1961.

December
The Minister of Defence announces that the United Kingdom was to form
one of four North Atlantic Treaty Organisation (NATO) air defence regions.