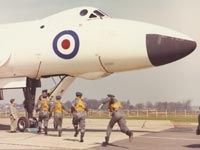 15 February
It is announced that 200 Royal Air force (RAF) personnel have been selected
to form the British Joint Trials Force, under the command of Wing Commander
C.E. Ness, for advanced testing of the Skybolt ALBM with Bomber Command
Vulcan B2s at Eglin Air Force Base in Florida.

12 March
The Air Minister announces that arrangements have been made for No.38
Group, Transport Command, to operate with English Electric Canberras and
reconnaissance aircraft. Two squadrons of Hawker Hunter fighter/ground-attack
aircraft had already been transferred from Fighter Command to No.38 Group
in January 1962.

6 April
Air Chief Marshal Sir Thomas Pike, the Chief of the Air Staff, is promoted
to Marshal of the Royal Air Force.

26 April
A Bristol Belvedere helicopter of No.72 Squadron, flown by Squadron Leader
J.R. Dowling, lifts an 80 feet pedestal and its surmounting sculpture
into place on the roof of the newly constructed Coventry Cathedral.

May
Headquarters, Near East Command is disbanded.

12 May
600 former veterans of the Royal Flying Corps and Royal Naval Air Service
attend an Air Council and Admiralty reception at Lancaster House to mark
the 50th year of military aviation.

25 May
Following a Pathet Lao offensive in Laos during early 1962, the South
East Asia Treaty Organisation establishes a multinational Joint Task Force,
JTF 116, to defend Thailand against any potential Pathet Lao or North
Vietnamese incursion. The RAF element of this force (Operation Bibber)
comprised an initial detachment of 6 Hawker Hunter FGA9s, which was later
increased to 10, drawn from No.20 Squadron, which deployed from Tengah
to Don Maung in Bangkok, from this date. Subsequently, the detachment
transferred to Chieng Mai in northern Thailand between 5 June and 15 November
1962. Despite an invasion scare in June, no incursions across the Thai
border took place.

16 June
A flying and static display is held at RAF Upavon to mark the golden jubilee
of military aviation.

July
No.2 Field Squadron, RAF Regiment, is converted to the parachute role.

7 July
The Founder’s Medal of the Air League, given for outstanding contributions
to British Aviation, is presented to the Central Flying School on the
50th anniversary of the latter’s formation.

22 October
Egyptian Air Force MiG fighters based in Yemen strike at Nuqab in Aden.
In response, the Royal Air Force (RAF) establishes border patrols and
a subsequent retaliatory attack, by RAF Hawker Hunters, destroyed a fort
in Yemen. Additionally, in a show of strength a Vickers Valiant of No.90
Squadron engaged on a ‘Lone Ranger’ exercise flew along the frontier.
No.13 and No.58 Squadrons (Canberra PR7) were detached to Khormaksar in
order to monitor Egyptian vessels in the Red Sea that were thought to
be carrying arms to Yemen. 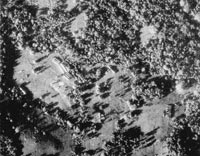 Following the discovery of preparations for the deployment of Soviet SS4 Sandal
Medium-Range Ballistic Missiles to the island of Cuba, on 22 October,
President John F. Kennedy announces the imposition of a quarantine (blockade)
of that island.

In light of the rapidly worsening relationship between the USA and the
Soviet Union and the assumption of Defence Condition 2 (DEFCON 2) alert
status by the US Air Force’s Strategic Air Command, eleven RAF Bomber
Command and RAF Germany nuclear strike squadrons and Thor missile squadrons
are placed on alert, but not dispersed, between 26 October and 2 November
1962. The Soviet Union began to dismantle the missile bases on Cuba from
2 November and the US blockade was terminated on 20 November.

14 November
Three Avro Vulcans from Nos. 27, 83 and 617 Squadrons set out on a round-the-world
flight during which they covered 30,000 miles in 50 hours flying time.
Stops included Perth in Australia, to coincide with the Commonwealth Games,
New Zealand, to coincide with celebrations of the 25th anniversary of
Royal New Zealand Air Force (RNZAF) and the USA. 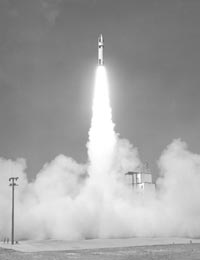 A US proposal to continue development of the system with the United Kingdom
on a 50/50 basis was rejected in turn by the British Government, which
instead elected to procure the Polaris submarine-launched ballistic missile
as the United Kingdom’s next-generation strategic nuclear deterrent system.

Subsequently, the Skybolt programme was officially terminated by the
USAF on 31 December 1962.

8 December
An Indonesian-sponsored revolt by the North Kalimantan National Army (TNKU)
begins with the aim of deposing the Sultan of Brunei. In response, British
forces initiated a contingency plan, Operation Ale (later changed to Borneo
Territories). 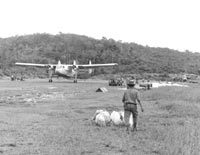 Elements of a Gurkha battalion were deployed from RAF Seletar to Brunei
Town by three Blackburn Beverleys of No.34 Squadron and to Labuan by a
Bristol Britannia of No.99 Squadron. Further reinforcements were subsequently
flown in by No.48 Squadron (Handley Page Hastings), No.52 Squadron (Vickers
Valetta) and No.205 Squadron (Avro Shackleton), supported by No.38 Squadron
RAAF (Lockheed Hercules) and No.41 Squadron, Royal New Zealand Air Force
(RNZAF) (Bristol Freighter).

Subsequently, No.20 Squadron (Hawker Hunter) and No.45 Squadron (English Electric Canberra)
were detached to Labuan to provide close air support and No.209 Squadron
(Scottish Aviation Twin Pioneer) and No.66 Squadron (Bristol Belvedere) 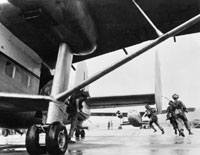 to Brunei for local transport.

Prompt action to seize areas taken by the TNKU led to the collapse of
the rebellion by 17 December, although low-level operations continued
for several months to mop up the remaining rebels.