The merger of Aden into the existing Federation of Emirates of the South,
renamed the Federation of South Arabia, heightens tensions within Aden
and the surrounding countryside and between Aden and Yemen. This culminated
with the declaration of a state of emergency following a grenade attack
on the High Commissioner at Khormaksar.

During 1964 attention was particularly focused on the Radfan area, where
the Qutebibi tribe were attacking traffic on the Dhala road. The Royal
Air Force (RAF) and Fleet Air Arm provided air support to Army units during
a major intervention in the Radfan, Operation Nutcracker, which began
on this date.

20-25 January
Driven by poor conditions of service and the continued employment of British
officers and Non Commissioned Officers, men of the 1st and 2nd Battalions,
Tanganyika Rifles, the 1st and 2nd Battalions, Uganda Rifles, and the
11th Battalion, Kenya Rifles, mutiny in Tanganyika, Uganda and Kenya.
Following requests for assistance from the leaders of the nations in question,
on 25 January two Bristol Belvedere HC1s of No.26 Squadron RAF, embarked
upon the carrier HMS Centaur, flew in Marines from No.45 Commando, Royal
Marines, to Colito Barracks in Tanganyika. The mutineers were taken by
surprise and rounded up.

On the afternoon of 25 January, an air strike by Fleet Air Arm de Havilland
Sea Vixens and Buccaneers on the barracks at Tabora is aborted ten minutes
from the target when the mutineers surrendered. Meanwhile, Blackburn Beverleys
of No.30 Squadron flew 450 infantrymen into Entebbe from RAF Eastleigh
in Kenya, to suppress the mutiny in Uganda. Mutineers in Kenya surrendered
to British troops stationed in the country.

28 March
On 13 March, a raid was conducted across the border from Yemen by armed
helicopters, supported by MiG17 fighters, against the village of Bulaq
and a Frontier Guard post. In response, Royal Air Force Hawker Hunters
attacked and destroyed a Yemen Republic fort at Harib. 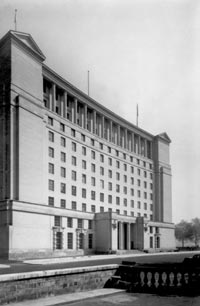 A Unified Ministry of Defence is established. The Air Ministry became the
Air Force Department, the Air Council became the Air Force Board of the
Defence Council and the Secretary of State for Air, the Minister of Defence
for the Royal Air Force (RAF).

29 April – 10/11 June
In
an effort to suppress continued attacks on the Dhala road, Radfan Force
‘Radforce’ is established with a brief to end the activities of dissidents
in the Radfan, to stop the spread of revolt and to hold the Dhala road
open.

During this period, Radforce fought a major campaign to take control
of key areas of the Radfan, supported by all Royal Air Force (RAF) units
in the region. RAF Hawker Hunters played a key role in the campaign and
in May and June they flew 642 sorties and fired 2,508 rockets and 183,900
rounds of 30mm Aden cannon ammunition.

The British Government announces its intention to grant independence to
Aden, while retaining a military base in the country. This resulted in
further fighting within Aden, both between the various nationalist groups
and between the latter and the security forces.

3 July
The Queen’s Colour for the Royal Air Force in the United Kingdom was presented
by Queen Elizabeth II at Buckingham Palace.

A Westland Whirlwind helicopter of No.110 Squadron carries equipment for
a new radio station to a site 9,000 feet up Mount Kinabalu in Borneo. 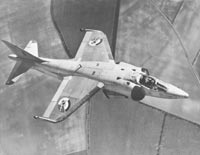 Technician and Craft Apprentice Schemes replace those for (Aircraft) Apprentices,
initiated in February 1920, and Boy
Entrants, initiated in September 1934, respectively.