10 January
A disbandment parade is held for the squadrons of the North East Air Force
Strike Wing (Nos. 6, 32, 73 and 249 Squadrons). The squadrons proceeded
to disband during January and February 1969. Subsequently, a new Central
Treaty Organisation dedicated Strike Wing was formed from No.9 and No.35
Squadrons, each equipped with 8 Avro Vulcan B2 bombers. 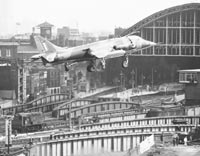 An air race between London and New York is sponsored by the Daily Mail
to commemorate the 50th anniversary of the first transatlantic air crossing.

British military participation in the air race was co-ordinated by an RAF team
under the codename Blue Nylon and included aircraft and crews of No.1
Squadron (Hawker Siddeley Harrier), No.55 and No.57 Squadrons (Handley
Page Victor tankers), No.72 Squadron (Westland Wessex), No.543 Squadron
(Victor SR2 reconnaissance aircraft) and No.892 Squadron Fleet Air Arm
(McDonnell Douglas Phantom FG1). 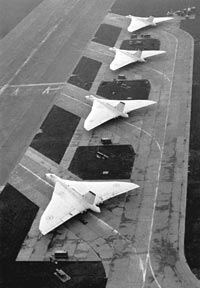 14 July
The first detachment of Royal Air Force (RAF) support helicopters is despatched
to Northern Ireland to assist British Army units attempting to control
inter-communal violence between the Protestant and Catholic communities.
Four Westland Wessex helicopters of No.72 Squadron were despatched to
Ballykelly. The detachment was relieved by a detachment from No.18 Squadron
in March 1970.