1 May
No.90 (Signals) Group is transferred from Strike Command to Maintenance
Command. 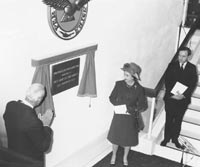 No.38 Group, Air Support Command, is transferred to Strike Command.

15 November
Queen Elizabeth II opens the Royal Air Force Museum at Hendon, which is
chosen as the most suitable site for the Museum due to its long aviation
history.