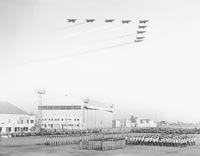 Vickers VC10 transport aircraft of No.10 Squadron RAF and Lockheed Hercules
from the Lyneham Tactical Wing evacuate British nationals from Tehran
during the Iranian Revolution.

31 March
The
Royal Air Force (RAF) withdraw from Malta, ending a 60 year presence on
the island.

December
Operation Agila: 7 Lockheed Hercules of No.47 and No.70 Squadrons, together with
6 Westland/Aerospatiale Pumas of No.33 Squadron, join a five-nation Ceasefire

Monitoring Force established to oversee the disarming of ZANU and ZAPU
guerrillas in Rhodesia following the conclusion of a peace agreement earlier
in that month.

Sadly, on 27 December, the day before the ceasefire came into effect,
a Royal Air Force (RAF) Puma was lost after flying into telephone cables.
RAF aircraft and personnel withdrew from Rhodesia during March and April
1980.