2 April
Four Lockheed Hercules C1 aircraft of the Lyneham Wing (Nos. 24, 30, 47 and 70 Squadrons) are despatched to Gibraltar to establish an ‘air bridge’ between the United Kingdom and the British Forces’ forward operating base at Ascension Island. Wideawake Air Base on Ascension Island, was to become central to the Royal Air Force’s participation in the Falklands Campaign.

3 April
A British Aerospace (BAe) VC10 of No.10 Squadron RAF is despatched from RAF Brize Norton to Montevideo in Uruguay, to collect the Governor of the Falkland Islands and the Royal Marines of Naval Party 8901, captured during the seizure of the Falkland Islands by Argentinean forces. A series of further repatriation flights were carried out between Motevideo and the United Kingdom by No.10 Squadron aircraft during April 1982. Subsequently, as hostilities commenced the VC10s of No.10 Squadron were charged with flying British casualties from the hospital ships Hecla, Hydra and Herald docked at Montevideo to the United Kingdom.

5-6 April
Two British Aerospace (BAe) Nimrod MR1s of No.42 Squadron fly from RAF St Mawgan to Wideawake Air Base on Ascension Island to begin long-range patrols in support of the Task Force. Subsequently, the Nimrod MR1s were supplemented by a detachment of Nimrod MR2s from Nos. 120, 201 and 206 Squadrons.

18 April
Five Handley Page Victor K2 tankers, drawn from No.55 and No.57 Squadrons, arrive at Wideawake Air Base on Ascension Island. The detachment was initially tasked with conducting Maritime Radar Reconnaissance sorties of the waters around the Falkland Islands and South Georgia.

20 April
In the longest operational reconnaissance mission carried out to that date, a Handley Page Victor returns to Ascension Island following a flight of 14 hours 45 minutes, during which time it had carried out a radar search encompassing some 150,000 miles of ocean around the island of South Georgia.

25 April
British Task Force aircraft engage in combat for the first time when the Argentine submarine Santa Fe is attacked by Westland Lynx helicopters. Later in the day Marines are air-lifted to South Georgia Island.

28 April
The Argentine government are given 48 hours warning that Britain is to impose a no-fly zone within a 322 kilometre (200 mile) radius of the Falkland Islands.

29 April
The first Avro Vulcan B2 bombers of the Waddington Wing (Nos. 44, 50 and 101 Squadrons) arrive at Ascension Island for operations against the Falklands. 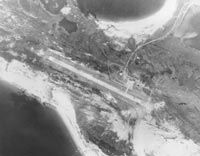 The first offensive sortie against the Argentinean Forces on the Falkland Islands is mounted by the Royal Air Force. During Black Buck 1, Avro Vulcan B2 ‘XM607’, supported by eighteen Handley Page Victor K2 tanker sorties, dropped twenty-one 1,000 pound (450 kilo) bombs across the main runway at Port Stanley airfield. The Vulcan recovered safety to Ascension Island after a flight of 15 hours 45 minutes. The sortie was the longest-range bombing operation under combat conditions then flown.

Subsequently, twelve British Aerospace (BAe) Sea Harriers of No.800 Squadron, HMS Hermes, attacked the airfield at Port Stanley and the airstrip at Goose Green with 1,000 pound (450 kilo) bombs. One Sea Harrier was damaged and an Argentine Mirage

IIIEA was shot down by a Sidewinder heat-seeking missile launched from a Royal Navy Sea Harrier. This is the first ever Sea Harrier combat victory. Later in the day another Mirage III and an Argentine Canberra bomber are shot down.

2 May
The Argentine Navy cruiser General Belgrano is sunk by the British nuclear submarine Conqueror.

3-4 May
During the second sortie against Port Stanley airfield by an Avro Vulcan B2 (Black Buck 2), a further twenty-one 1,000 pound (450 kilo) bombs are dropped on Port Stanley airfield. British Aerospace (BAe) Sea Harriers carrying out post-attack reconnaissance reported that bombs had fallen some fifty yards west of the runway, however, no repairs had been carried out on the damage that had resulted from the initial air raid.

A British Aerospace (BAe) Sea Harrier is lost in an attack on Port Stanley.

4 May
The Type 42 destroyer HMS Sheffield, on radar picket duty west of the Falklands, is hit and disabled by an Exocet anti-shipping missile launched by a Dassault Super Etendard of the Argentinean Navy’s 2 Escuadrilla de Caza y Ataque. The warship was abandoned and subsequently sank.

7 May
Six British Aerospace (BAe) Harrier GR3s of No.1 Squadron RAF depart from the United Kingdom aboard the merchant vessel Atlantic Conveyor en route to the Ascension Islands.

The first British Aerospace Nimrod MR2, modified for in-flight refuelling, to be despatched to the South Atlantic, Nimrod MR2P ‘XV227’, is deployed to Wideawake Air Base on this date. Subsequently, this aircraft flew the first Nimrod patrol featuring air-to-air refuelling, during a flight by a No.206 Squadron crew to a point some 2,750 miles south south-west of Ascension Island on an anti-submarine warfare patrol in support of elements of the Task Force en route to the Falkland Islands.

7 May
Two Sea Harriers from HMS Invincible are lost, they are believed to have collided while descending through cloud.

8 May
A Westland Sea King HAR3 of No.202 Squadron RAF is flown from the United Kingdom to Ascension Island, aboard a Shorts Belfast of the cargo airline Heavylift, to provide search and rescue cover for the Ascension area. The Sea King also flew transport sorties around the Island. This detachment ended on 7 September; the aircraft returned to the United Kingdom aboard HMS Invincible.

8 May
A combined force of around 20 Harriers and Sea Harriers fly non-stop from Royal Naval Air Service (RNAS) Yeovilton in Somerset to Ascension Island, in-flight refuelling several times during the nine hour flight.

15 May
A new world distance record for an operational reconnaissance mission is created by a British Aerospace (BAe) Nimrod of No.201 Squadron, which covered a distance of 13,357 kilometres (8,300 miles) over the South Atlantic in 19 hours 5 minutes.

18 May
The air component of the Falklands Task Force is reinforced with the arrival of six British Aerospace (BAe) Harrier GR3s of No.1 Squadron RAF and eight British Aerospace Sea Harriers of No.809 Squadron on board the Atlantic Conveyer. Four Harrier GR3s were flown from the Atlantic Conveyor to the aircraft carrier HMS Hermes and the remaining aircraft arrived aboard Hermes on 19 and 20 May.

21 May
Westland Sea King helicopters play a central role in the invasion of the East Falklands.

24 May
After suffering a severe air attack on the 23 May, HMS Antelope explodes and sinks. Seven Argentine aircraft are shot down by British forces.

24-26 May
In order to guard against the possibility of an Argentinean air attack on Ascension Island, three McDonnell Douglas Phantom FGR2 aircraft of No.29 Squadron are deployed to Wideawake Air Base. Responsibility for the Quick Reaction Alert (QRA) air defence commitment was assumed from No.1 Squadron on 25 May. The detachment ceased QRA duties on 14 July, and returned to the United Kingdom during the period 18-20 July.

25 May
The type 42 destroyer HMS Coventry is sunk by bombs dropped from Argentine Skyhawk aircraft. The container ship Atlantic Conveyor was hit by an Exocet sea-skimming anti-shipping missile launched by a Dassault Super Etendard of the Argentinian Navy whilst north-east of the Falkland Islands. The vessel was lost, together with the stores she carried, the latter included no fewer than ten helicopters – three RAF Boeing Chinooks, five Royal Navy Westland Wessex HU5s and a single Royal Navy Westland Lynx HAS2. The sole surviving Chinook with the Task Force (ZA718) was to play a vital role in British military operations during the remainder of the campaign.

27 May
A British Aerospace (BAe) Harrier GR3 of No.1 Squadron is shot down during an attack on Argentine positions in the Goose Green area – the pilot ejected successfully.

28 May
Goose Green and Darwin are re-taken by British forces.

30 May
A British Aerospace (BAe) Harrier GR3 of No.1 Squadron is shot down during an attack in support of British ground forces – the pilot ejected successfully.

30-31 May
During Black Buck 5, an Avro Vulcan B2 launches two Shrike anti-radar missiles in an effort to destroy a Westinghouse AN/TPS-43F radar in the Port Stanley area. However, the radar was only slightly damaged.

2-3 June
Black Buck 6: an Avro Vulcan B2 launches two Shrike anti-radar missiles, destroying a Skyguard anti-aircraft artillery fire control radar located near Port Stanley. However, the Vulcan’s flight refuelling probe fractured during contact with a Handley Page Victor tanker on the homeward run and the aircraft was forced to divert to Rio de Janeiro in Brazil, where it was detained until 10 June.

5 June
A Forward Operating Base at Port San Carlos for British Aerospace (BAe) Harrier and Sea Harrier aircraft, completed by the Royal Engineers on 2 June, is first used. Known to No.1 Squadron aircrew as ‘Sid’s Strip’ in honour of its Commanding Officer, Squadron Leader B.S. Morris, and ‘HMS Sheathbill’ by Fleet Air Arm aircrew, the base enabled No.1 Squadron Harrier GR3s to be held on ground alert while awaiting tasking.

Argentine positions at Port Stanley are attacked by Army Air Corps Westland Scout helicopters armed with SS11 wire-guided anti-tank missiles. These were the last offensive air operations of the conflict and Argentinean forces on the Falkland Islands surrendered later that day.

14 October
Air Chief Marshal Sir Michael Beetham is promoted to the rank of Marshal of the Royal Air Force and relinquished the appointment of Chief of the Air Staff. 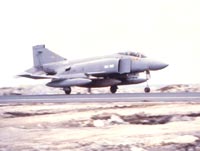 Following the reconstruction and extension of the runway at Port Stanley, the first McDonnell Douglas Phantom FGR2 of No.29 Squadron RAF arrive at RAF Stanley. A further eight aircraft from the squadron arrived during the following week. No.29 Squadron exercised responsibility for the air defence of the Falkland Islands between October 1982 and the end of 1983, when No.23 Squadron assumed that role.