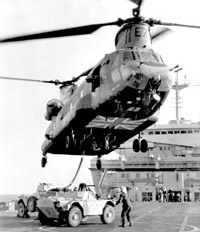 Royal Air Force (RAF) Boeing Chinook helicopters of No.7 and No.18 Squadrons supported the British Army detachment in Lebanon, while the Hawker Siddeley Buccaneers of No.12 and No.208 Squadrons provided an offensive capability, using RAF Akrotiri in Cyprus as a forward base.

18 November
No.1 and No.38 Groups RAF Strike Command are amalgamated as No.1 Group.

16 December
The Chiefs of Staff of the British, French, West German, Italian and Spanish air forces sign a preliminary agreement for a Future European Fighter Aircraft.