January
Operation Swift Sword (Saif Sareea) in Oman sees the first air-to-air
refuelling of a passenger aircraft. A Tristar K1 of No.216 Squadron, RAF
Brize Norton. This British exercise also saw the first operational turn
round of Panavia Tornados from No.617 Squadron and No.229 Operational
Conversion Unit.

March
The Royal Air Force (RAF) plays a vital role in the air and sea rescue
operation after the Herald of Free Enterprise capsizes at Zeebrugge.

April
Yorkshire University Air Squadron based at RAF Finningley claims to be
the first to recruit girls and the first to send a girl solo in the Bulldog.

April
A Vickers VC10 tanker of No.101 Squadron breaks the record for non-stop
flying time between the United Kingdom and Australia, completing the 9000
mile flight in 16 hours 1½ minutes. 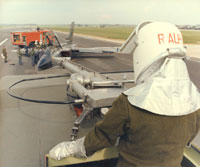 Royal Air Force fire tenders revert to red paint after many years “toned down in olive drab and yellow side stripes”.

24 September
The first unrefuelled transatlantic crossing by a British fighter is made
by a Panavia Tornado F3 returning to the United Kingdom from Arizona.
The aircraft covered the 2200 nautical miles from Canada in 4 hours 45
minutes.

October
The first award of the Queen’s Medal to a woman officer. The award
was made to the officer graduating from the RAF College, Cranwell assessed
as the most outstanding officer cadet of the year. It was presented to
23 year old Flight Officer Susan Forbes of the Engineering Branch.