the invasion and occupation of Kuwait by Iraqi forces on 2 August, a request
for security assistance is issued by King Fahd of Saudi Arabia to friendly
governments on 6 August. In response, the President of the United States
of America, George Bush, immediately initiated the deployment of United
States forces to Saudi Arabia (Operation Desert Shield).

11 August
Twelve Panavia Tornado F3s drawn from No.5 and No.29 Squadrons attending
an Armament Practice Camp at RAF Akrotiri are deployed to Dhahran in Saudi
Arabia. This composite deployment was subsequently designated No.5 (Composite)
Squadron.

11 August
Two British Aerospace (BAe) VC10 tankers of No.101 Squadron are despatched
to Seeb in Oman, to support Royal Air Force detachments in the Gulf area. 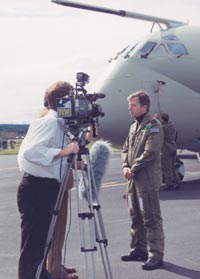 The Royal Air Force’s SEPECAT Jaguar detachment redeploys from Thumrait in
Oman to Muharraq in Bahrain.

detachment of four Handley Page Victor K2 tankers of No.55 Squadron is
deployed from RAF Marham to Muharraq in Bahrain. This detachment would
subsequently be increased to a maximum of eight aircraft during January
1991.