14 January
A reconnaissance detachment consisting of six Panavia Tornado GR1As drawn from
No.II (AC) and No.13 Squadrons RAF, is established at Dhahran.

The Coalition air assault on Iraq, Operation Desert Storm, begins. During
the opening phase of the assault, airfield attacks are carried out by
Panavia Tornados of the Royal Air Force armed with the Hunting JP233 airfield
denial weapons and 1,000 pound (454 kilo) bombs.

A Royal Air Force Tornado was shot down during low altitude toss-bomb
attack an Iraqi airfield just after dawn, the crew ejected and were taken
prisoner.

17-18 January
Attacks by Royal Air Force Panavia Tornados on airfields and other key installations
continues, supported by aircraft fitted with ALARM defence-suppression
missiles. On 18 January, one Tornado was shot down and the crew killed.

20-22 January
The air offensive continues, with particular emphasis placed on the location
and destruction of Scud missile sites. Two further Panavia Tornados were lost
during these missions.

23 January
Panavia Tornado GR1s, armed with 1,000 pound bombs, carry out medium level attacks
on Iraqi airfields. One Tornado was lost when one of its bombs exploded
prematurely, the crew ejected and were taken prisoner.

From Muharraq, the detachment would provide a laser designation capability
for the Tornado force using the Pave Spike laser-designating pod. The
first operational sortie was flown by the Buccaneer detachment on 2 February.

6 February
A detachment of Panavia Tornado GR1s, modified to carry the Thermal-Imaging And
Laser-Designating pod, is established at Tabuk.

13 February
During an attack on the Fallujah highway bridge by Panavia Tornados using laser-guided
bombs, one weapon suffers a guidance failure and explodes in a built-up
area, killing 130 people and injuring a further 78.

14 February
A Panavia Tornado GR1 is shot down by a surface-to-air missile during a medium-level
attack on Al Taqaddum air base. The pilot ejected and was captured and
the navigator was killed. This was the sixth and last Tornado GR1 to be
lost during hostilities.

15-23 February
Attacks on Iraqi troop concentrations in and around Kuwait intensify with
the approach of ‘D-Day’ for the land offensive. As a result of Coalition
air attacks upon bridges, highways and rail communications, the battlefield
was now virtually isolated.

28 February
On the orders of United States President George Bush, offensive operations
against Iraq end at 0500hrs local time. During the conflict, Coalition
forces lost 68 aircraft due to a combination of Iraqi anti-aircraft artillery
(AAA) surface-to-air missiles (SAM) and accidents. Iraqi Air Force losses
were estimated to be 141 aircraft, of which 42 were destroyed in air combat. 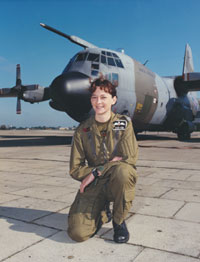 3 September
Operation Warden: SEPECAT Jaguars of No.54 Squadron begin to patrol the
airspace over Northern Iraq in an effort to reassure Kurdish refugees
sheltering in ‘Safe Havens’.

16 December
A press release is issued to announce that the restriction on female fast
jet aircrew had been lifted. From this point, fast jet places became open
to female pilots and navigators.