With the outbreak of the First World War in August 1914, it was clear that the Royal Flying Corps (RFC) would have to expand if it were to serve the Army in France and replace its own casualties.

The Central Flying School (CFS) did not have the capacity to support this growth, so new training units were opened and civilian flying schools commandeered. The quality of the instructors engaged varied, however, and many of the aircraft used were unsuitable. Accidents were common and for most of the war casualties at training units were greater than losses in action.

In early 1916, the RFC began regulating training standards, with pupils expected to fly at least 15 hours’ solo. Unfortunately, the ever-increasing demand for pilots at the front, and a lack of resources at the flying schools, meant some students received insufficient training and arrived at operational squadrons unprepared for combat. Partly because of this, casualties rose sharply and by the spring of 1917 the life expectancy of a new pilot could be measured in weeks.

Gradually the situation improved and, as the RFC continued to grow, its training organization became more sophisticated. A Training Brigade was formed and specialist schools, staffed by veterans, were established to teach air fighting, bomb dropping, night flying and a variety of other skills. Schools were also set up overseas

in Egypt, Canada and the USA. 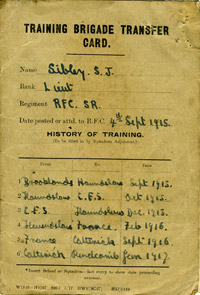 Perhaps the most important development was the adoption of Major Robert Smith-Barry’s ‘Gosport System’ of training, which gave students the confidence to fly their aircraft to the limit. These changes helped the RFC to turn out large numbers of capable combat pilots quickly while reducing the number of accidents.

When the Royal Air Force (RAF) was formed in April 1918, it inherited over 100 training squadrons and 30 specialist schools; units that would later boast more than 7,000 aircraft. By the Armistice in November, pilots were receiving instruction in all aspects of air fighting on an eleven-month course which included an average of 50 hours’ solo flying. From a single flying school in 1914, the RAF’s training organization had, in four years, grown to become the largest and most effective in the world.