At the end of the First World War the Royal Air Force was the largest air arm in the world, with 263 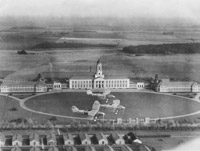 squadrons and 291,000 officers and men. However, in 1919 the Government estimated that Britain would not have to fight a major war for the next ten years, and cut the RAF to 17 squadrons and 31,000 personnel. Reduced to this level, the new service had to be carefully restructured to ensure there were enough trained airmen to support its expansion in an emergency.

Career officers were selected and taught to fly during their two year course at the RAF College at Cranwell. 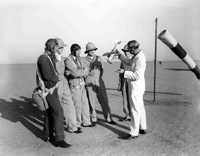 At the same time, a larger number of short service officers earned their Pilot’s Wings after a year’s tuition at RAF Flying Training Schools (FTS) in the United Kingdom and Egypt. From 1925, a second-line force of Special Reserve Squadrons and territorially-based Auxiliary Squadrons was raised. These part-time pilots received training during the weekend at civilian-run flying schools.

With the rise of Nazi Germany, the ‘Ten Year Rule’ was abandoned, and between 1934 and 1939 a series of expansion schemes was introduced 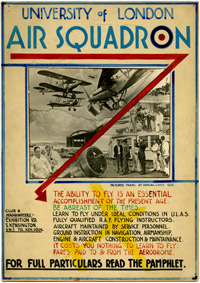 to enable the RAF to meet the threat posed by Hitler’s Luftwaffe. In May 1936 a separate

Training Command was established and, in July, the RAF Volunteer Reserve (RAFVR) was formed. The RAFVR provided a reservoir of trained aircrew to support the regular and reserve squadrons. Pupil pilots learnt to fly at weekends at civilian-run flying schools and attended classes in the evenings for their ground based tuition.

To cope with the influx of personnel, from the mid 1930s onwards, all student pilots, except Cranwell cadets, received two months’ elementary training at civil schools. The FTS course was also cut from nine months to six to increase the output of pilots. During this period the Schools were supplied with fast new monoplane aircraft, such as the Miles Magister and Link Trainers 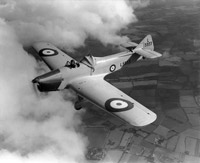 By 1939, RAF flying training was better than ever before, but shortages of instructors, airfields and training aircraft meant too few pilots were being produced. Nevertheless, the training structure was almost in place to support the expansion of the RAF into the mass ‘citizens’ air force’ needed to fight the coming war.