In the 1950s, entrants hoping to become pilots first had to pass through the Aircrew Selection Centre at RAF Hornchurch. 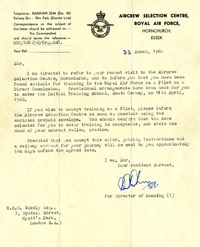 Pilots were selected on the basis of aptitude and physical condition so only the most promising applicants were selected. After enlistment, aircrew cadets undertook a 12-week ground course at the Initial Training School at RAF Kirton-in-Lindsey. On completion, cadets then went to a Basic Flying Training School to be trained up on the piston Hunting Percival Provost – the first half of the new Provost/Vampire training sequence.

After 120 hours on the Hunting Percival Provost, pupils moved to one of four Jet Flying Training Schools, for training on the de Havilland Vampire. After successful completion of the de Havilland Vampire stage, pilots were awarded their Pilot’s Wings. Pilots destined for the fighter or bomber role progressed to a jet Operational Conversion Unit for battle training. Those who opted for other Commands, such as Coastal or Transport, had to go to an Advanced Flying School to convert to multi-engine piston aircraft before progressing to Operational Conversion Units.

In 1959, the training sequence changed slightly when the RAF decided to go “all jet”. They ordered a dedicated jet trainer for the purpose – the Hunting Percival Jet Provost. Instead of undertaking basic training on the piston Provost, pupils now spent 170 hours on the Jet Provost before moving to advanced jet training on the de Havilland Vampire and finally an Operational Conversion Unit. In 1962, a “fast jet” stage was added before the OCU stage to provide an introduction to high speed flight.

Training pathways for pilots in the early 1950s