During the 1950s, student pilots at the Flying Training School (FTS) were given basic training entirely on the Hunting 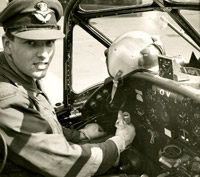 Percival Provost. This aircraft was chosen because it was quite powerful and complemented the de Havilland Vampire trainer, which formed the second half of the pilot training sequence at this time. Pupils spent sixty hours dual training, picking up the basics of flight, as well as sixty hours solo. This was almost twice as much flying as was done on previous RAF training courses, which allowed more advanced exercises to be introduced at an earlier stage. 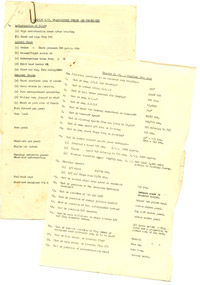 Therefore, students had to prove they were capable of a controlled descent through cloud. This was so important that it was practised at the end of nearly every exercise. Pupils were also instructed in aerobatics and Mach runs, flying close to the speed of sound. The de Havilland Vampire was also capable of controlled spinning so that pupils could be safely taught how to exit a spin. The later stages of the de Havilland Vampire course involved formation flying at various altitudes and more aerobatics. 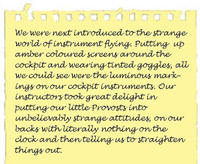 Extract from the memoir of a cadet at
1 Initial Training School, 1960

About halfway through their 30 week course, student pilots would have completed enough

instrument flying to qualify for their white instrument ratings. Pilot’s Wings were awarded on completion of jet training and suitable candidates were selected for commission. With almost half of their basic training spent on jets, fighter and bomber pilots no longer had to gain jet experience at an Advanced Flying School, they could go straight to an Operational Conversion Unit. Advanced Flying Schools were instead used for conversion to multi-engine piston aircraft.