By 1959, the Hunting Percival Jet Provost had arrived at the Royal Air Force (RAF) 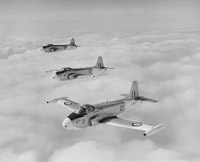 training units and the two-stage training scheme became all jet. The new jet training followed much the same lines as that on the piston Provost, except pupils were made oxygen-and fuel-conscious from the start. 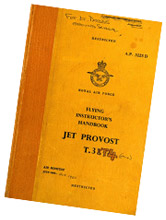 Flying instructor’s handbook for the Jet Provost,
with a list of training exercises, 1965

The training syllabus was amended so that the elementary, or basic, stage was divided into an ab initio (beginner) stage and a basic stage. Trainees spent 23 weeks in the ab initio stage, flying for 85 hours and spending the rest in ground school. 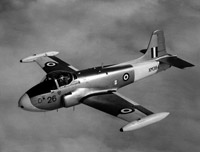 The basic stage lasted a further 22 weeks with 75 hours of flying. The range of exercises was increased to include instrument flying, meaning that pupils gained their white instrument rating card before they reached the Vampire stage of training.

Following this, pupils would move on to advanced jet training in the Folland Gnat. 77 hours would be spent on general handling, 25 hours on instrument flying, 23 hours practicing navigation,

13 hours on formation flying and finally 12 hours of night flying.