Flight Lieutenant F.H. Pelham, known as “Freddie” reported for duty with the RAF at No.1 Receiving Wing at Babbacombe, Devon in October 1940. Completing his initial ground training at 4 Initial Training Wing at Paignton he was posted to Canada in January 1941.

This was before the RAF started to assess those undertaking pilot training prior to being sent overseas. Flt Lt Pelham recalls that“in my draft there were 43 trainees of whom only 26 qualified for their Pilots Wings”. 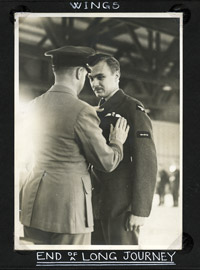 Ontario, on North American Harvard aircraft. He received his Pilots Wings mid July 1941. In his photograph album he records the presentation as “the end of a long journey” but it was just the beginning of his RAF flying career.

Returning to the United Kingdom via Iceland Flt Lt Pelham was posted to 52 Operational Training Unit (OTU) for his final stage of flying training in Miles Master and Hawker Hurricane aircraft. He joined 264 Squadron a Boulton Paul Defiant night fighter unit based at RAF West Malling in May 1942. He recalls that “I had not flown at all at night in the UK – only 10 hours night flying at SFTS in Canada – this bore no relation to night flying in blacked-out England. The Flight Commander thought about sending me to 60 OTU for training on the Defiant but in the end decided to train me on the squadron. I was operational by early January 1942” 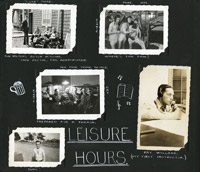 Later that year he converted to twin engine aircraft and from August 1943 flew de Havilland Mosquitoes operationally. In November he “was sent on rest to 54 OTU, Charter Hall, Scotland as an Instructor”.
From June 1944 Flt Lt Pelham returned to operations serving with 151 Squadron and in September 1945 he received his final posting to the Sector Headquarters at RAF North Weald as Sector Controller. Flt Lt Pelham was demobbed on 25 April 1946.