Flying Officer F.G. Kelsey DFC served in Bomber Command with 625 Squadron during the Second World War. His pilot training took place in South Africa and he kept a diary during this time. The following extracts provide an insight into his experiences upon arriving in South Africa in March 1942 and finishing with his graduation as a pilot. 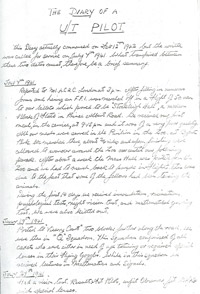 Tuesday March 24th 1942
The camp houses all u/t [under training] pilots, both South Africans and us RAF. We have South African instructors and all get along very well together. The part of the camp we are in is known as ITW and is the equivalent of our receiving wing.


Monday March 30th 1942
This morning after parade we were told to collect our kit because we were moving over to ATW. Upon arriving we are divided into 2 flights (alphabetically)


Wednesday May 6th 1942
All “sweating” on our exam results. This afternoon we have been told who failed in “Procedure” and I was not among them 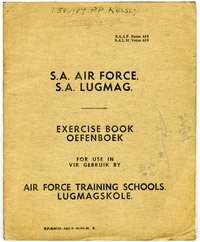 Saturday May 23rd
..arrive at Potchefstroom…this is an EFTS and we are told we shall probably start our flying training on Tuesday


Tuesday May 26th
Breakfast at 6am at the hangars at 6:30am. We collect chutes and sign the Authorisation book. I see that I am flying first, wheel out the plane we are to use…We go up and contrary to my thoughts I am not afraid but thoroughly enjoy it. I’m given the controls to fly straight and level, climbing, gliding..Altogether I fly 2 periods of 35mins..


Saturday May 30th 1942
No flying today. A few lectures, an inspection and we go to Potchefstroom. Lunch and then flicks and back to camp

Tuesday June 2nd 1942
Some excitement today, the instructor explained to me the method of recovering from a spin so we went up to 3000ft…


Friday September 4th 1942
I am, tomorrow going to Waterkloof..for my SFTS as a potential bomber pilot

Wednesday November 18th 1942
My passenger test today. I did pretty fair..I have had a pretty tough time whilst being here. Altogether I have had 13 different instructors in 10 weeks.

Sunday January 3rd 1943.
So far I am pretty well certain that I have passed all the tests that I have taken. There is a real purge on at the moment in the “washing out” line. No one feels safe. We have now only 32 of the original 50 who came here left.

Friday February 19th 1943 (The Great Day)
Up at 6:30. Breakfast, wash and shave then dress in our best Blues. On parade at 8am…at 8:50 we commence the march. On to the parade ground, the band playing, guests seated in wicker chairs each side of the Saluting base. We march past the Base then around and halt facing the base. Stand at ease until the inspecting officer arrives when we give a general salute. He then inspects us when we again march past the base. We, the course passing out, then march off the ground and discard our webbing, bayonet and rifle.

Forming up again we march back on the parade ground halting between the guard of honour and the base, facing the base. The names of the Cadets are then called out individually they march forward and are presented with their wings. The first six are in order of merit after which it is in alphabetical order. The wings are presented by Major Gen Pool …he murmers to each cadet pins on the wings and wishes him luck. After the last man has received his wings, Maj Gen Pool gave a short speech at the end of which we pilots march past, salute him, march past the guard of honour and salute them and off the parade ground. Whilst this is going on 3 aircraft are flying in formation and they salute by diving. I am no longer a pupil pilot but a pilot. Tomorrow I shall be a Sergeant Pilot so this ends the diary of a under training pilot, 19 months from entering the service.